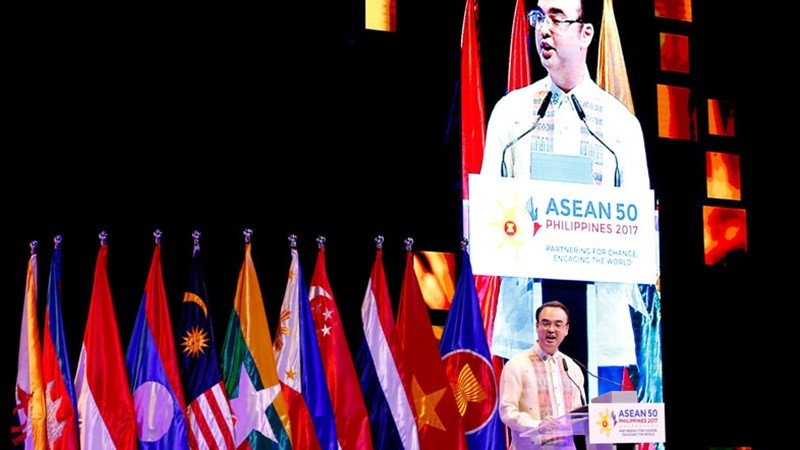 In honour of ASEAN Day 2017 on 8 August, the Economic Research Institute for ASEAN and East Asia (ERIA) released the second and fourth volume of the five-volume commemorative publication produced under the [email protected] Project during the ASEAN Ministerial Meeting in Manila. ERIA collaborated with the Philippine Government as part of the commemorative events to celebrate ASEAN's 50th anniversary in 2017.

ERIA President, Prof Hidetoshi Nishimura, attended the Grand Celebration of the 50th Anniversary of ASEAN, which also marked the closing of the ASEAN Ministerial Meeting. Prof Nishimura personally presented the two books to the Foreign Ministers of ASEAN Member States. ERIA's contribution was acknowledged by the Philippine Government as part of the deliverables for the Philippines' ASEAN chairmanship.

'As part of our chairmanship initiatives, I would like to acknowledge the Economic Research Institute for ASEAN and East Asia or ERIA, for working closely with the Philippines in producing a five-volume book in ASEAN's 50 years of regional cooperation as one of ASEAN's 50th year commemoration,' said H.E. Alan Peter S. Cayetano, the Philippines' Secretary of Foreign Affairs, who chaired the Ministerial Meeting.

In addition, ERIA's initiatives were also recognised by ASEAN Foreign Ministers, as mentioned in the Joint Communiqué of the 50th ASEAN Foreign Ministers' Meeting: 'We appreciated the various initiatives and activities organised by the ASEAN Committees in Third Countries and International Organizations (ACTCs), ASEAN Dialogue Partners, and regional and international institutions and think tanks, including the Economic Research Institute for ASEAN and East Asia (ERIA) to contribute to the celebration of ASEAN's golden anniversary.'