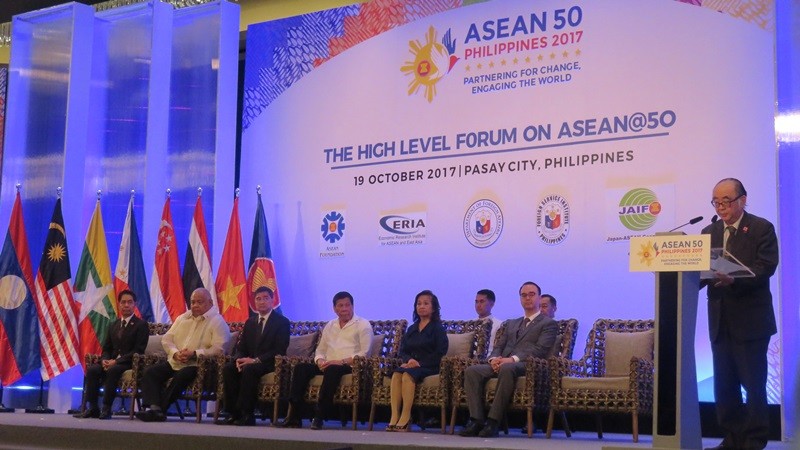 PASAY CITY, THE PHILIPPINES - 19 October 2017: The Department of Foreign Affairs (DFA), the Economic Research Institute for ASEAN and East Asia (ERIA), and the Foreign Service Institute (FSI) of the Philippine Government with the support of Japan-ASEAN Integration Fund (JAIF) and ASEAN Foundation (AF), co-hosted The High Level Forum on [email protected] on 19 October 2017 in Pasay City, Manila.

The highlight of the one-day event was a keynote address of President Rodrigo Roa Duterte of the Republic of the Philippines, in which he stated that the ASEAN story is a remarkable account of determination.

'ASEAN at 50 is not a complete story, nor it is a finished product, we are still working towards a peaceful, stable, and resilient community,' said President Duterte.

The morning panel discussion was conducted with the same theme as the Philippine theme: 'ASEAN: Partnering for Change, Engaging the World' involving senior government officials, an expert, and a youth representative. One of the panellists, Hon Prof Dr Mari Elka Pangestu, former Minister of Trade and former Minister of Tourism and Creative Economy, the Republic of Indonesia stated that 'ASEAN and Asia have grown and become integrated in the past three decades, reduced poverty with very conducive world economic environment. However, we still need to continue to grow to come out from the middle-income trap by strengthening ASEAN centrality within the whole Asia context to push forward reforms and continue the process of opening up,' said Prof Pangestu. Director of Media Bureau of the MVP Group of Companies, Atty Michael T. Toledo, moderated the discussion.

In the afternoon, Hon Dr Surin Pitsuwan, the Former Minister of Foreign Affairs of the Kingdom of Thailand and the former ASEAN Secretary-General moderated a conversation with two former Heads of State, discussing the Retrospectives and Perspectives on the Making, Substance, Challenges, and Future of ASEAN.

Former President of the Philippines, H.E. Gloria Macapagal-Arroyo, recounted her substantial involvement with the evolution of ASEAN, especially the support for ASEAN from the Philippines during her Presidency. She remarked that ASEAN has brought numerous benefits to the people of ASEAN including opportunities to travel, cheaper goods from other countries in the region, larger markets, increased job opportunities and more foreign investment. Looking forward towards the next 50 years, she emphasised that 'we need to work as one to collectively benefit.'

According to H.E. Abishit Vejjajiva, former Prime Minister of the Kingdom of Thailand, the ASEAN Socio-Cultural Community is now the most important pillar in building the ASEAN Community. 'For a sustained integration arrangement to be successful, you have to create a sense of belonging. We have to make ASEAN produce benefits that are tangible and people-centred.'

'Reading their essays in Volume 1 will clearly show the two are very articulate Leaders who offer both deep understanding, insights, and thought-provoking voices for an even better ASEAN for the future. So please engage in a conversation with them this afternoon, because transitioning from a Leaders-led ASEAN to one that is more people driven means that we get involved much more deeply than before in the ASEAN project,' said Prof Hidetoshi Nishimura, President of ERIA.

The Forum is the first high level event involving a Head of State, former Heads of State, Ministers, and former Ministers that ERIA has held since its founding in 2008. It is the culmination of a series of commemorative events hosted by ERIA in cooperation with partners in several cities in the Philippines, focusing on the three pillars of ASEAN: the ASEAN Political Security Community, the ASEAN Economic Community, and the ASEAN Socio-Cultural Community. The first event was the Public Symposium on Building ASEAN Political Security Community and National Resiliency held in Iloilo City on 18 June 2017, in cooperation with the University of the Philippines in the Visayas (UPV). For the second event, ERIA collaborated with the Philippine Institute for Development Studies (PIDS), the Mindanao Development Authority (MinDA), the ASEAN Society (AS), with the support of the Philippines' Department of Foreign Affairs (DFA)-Philippine Mission to ASEAN, to co-host the Public Symposium on ASEAN Socio-Cultural Community and Nation Building held in Davao City on 24 August 2017. The Public Symposium on ASEAN Economic Community and East Asia Integration and Nation Building was the third event in the series. It was held in Manila on 21 September 2017 by ERIA and PIDS, with the support of DFA-Philippine Mission to ASEAN.