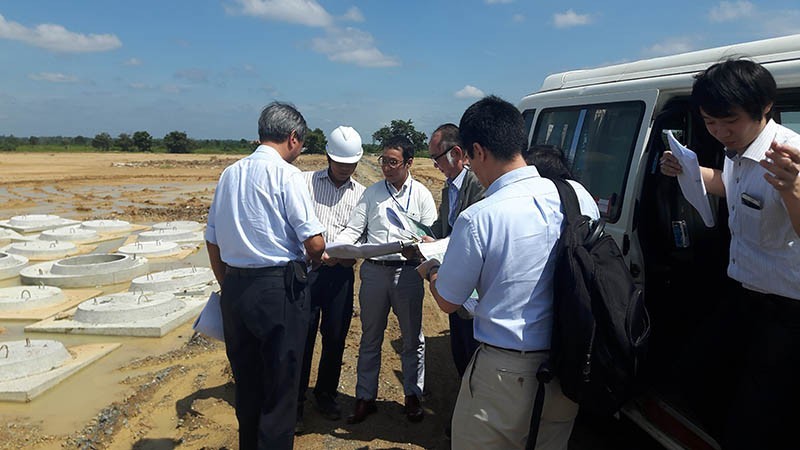 Poipet, 6 December 2016: From 30 October to 2 November 2016, a research team from the Economic Research Institute for ASEAN and East Asia (ERIA) on the Comprehensive Asia Development Plan (CADP) travelled from Pleiku in Viet Nam to Poipet in Cambodia by car.

The purpose of the road trip was to conduct a site visit to several infrastructure projects that are listed in CADP 1.0, CADP 2.0, as well as other projects related to the ASEAN Connectivity and Southern Economic Corridor of the Greater Mekong Subregion.

Along the Cambodian National Road No.9 in Ratanakiri province, which was listed in CADP 1.0, there were many big plantations that produce various crops such as cashew nuts, pepper, and cassava. The plantations and processing factories along the National Road will benefit from improved electricity supply and accessible road networks, which will help promote the development of agroprocessing industries in this area to boost exports of value-added products from Cambodia.

The research team noted significant progress in the restoration of the Royal Railway of Cambodia's North Line (known as the Missing Link). The Friendship Railway Bridge that connects the Cambodian and Thai railways in Poipet was completed in September 2016, while the reconstruction of the railroad between Sisophon and Poipet (listed in CADP 2.0) is expected to be finished in 2017.

In addition to roads and railways, CADP 2.0 also listed the development of several Special Economic Zones (SEZ) in Poipet among its projects in order to attract foreign investors, especially those that implement 'Thailand-Plus-One' strategy and will broaden their supply chain network from Thailand to Cambodia. One SEZ, the Techno Park Poipet managed by Toyota Tsusho Corporation, has completed the construction phase and started its sales operation on 1 September 2016.

As part of efforts to address other issues that have been plaguing investors such as inadequate electricity supply, scarcity of skilled labour, and high logistics cost, last year the Royal Government of Cambodia launched Cambodia Industrial Development Policy 2015-2025 (IDP). The ERIA CADP research team noted the steady progress of infrastructure developments in Cambodia in line with the direction proposed in IDP and CADP2.0. The team would continue its follow-up study of CADP2.0 to ensure the continuous implementation of CADP 2.0 projects in this region.