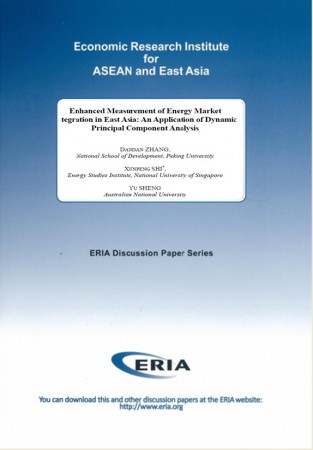 As a part of the initiatives to enhance cooperation between ASEAN and its dialogue partners, the energy market integration (EMI) in East Asia has been under way for over a decade. Despite the efforts exerted by countries in the East Asia Summit (EAS) region, little research has been done to measure the extent of the EMI's progress. This paper innovatively applies the dynamic principal component analysis to measure EMI and its evolution in the EAS region between 1995 and 2011. The EMI is measured from all the five dimensions that have been identified in literature: (1) energy trade liberalisation; (2) investment liberalisation; (3) energy infrastructure development; (4) domestic market openness; and (5) energy pricing liberalisation. Results show that significant progress has been made for the EMI in the EAS region, although there are cross-country disparities in different aspects. According to the level of progress made in the past, further efforts towards EMI in general should focus on liberalising national markets, then phasing out fossil fuel subsidies and finally, liberalising investment regime. Some mechanisms have to be developed to keep national level market liberalisation under monitoring. Certain countries that lagged behind in EMI may have to catch up and learn from either their past experiences or from other nations as well as focus their efforts on their relatively weak dimensions.