UN Special Envoy and SAC more than tit for tat 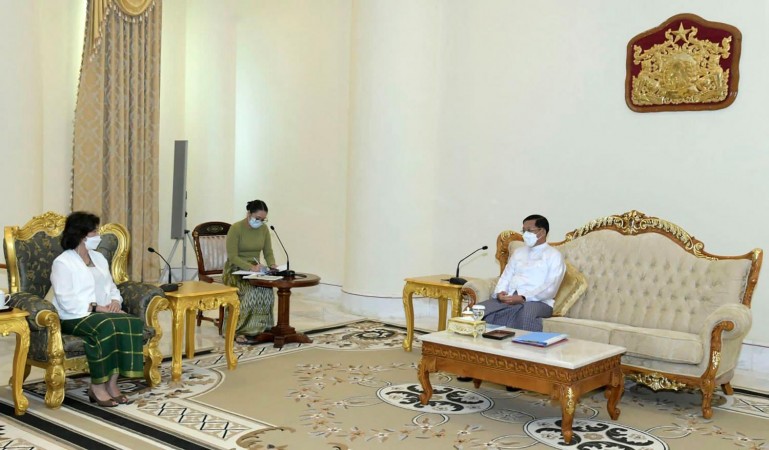 By Mr Kavi Chongkittavorn, Senior Communications Advisor: When the United Nations Secretary General’s special envoy met recently with the military junta leader of a pariah state, the expectation was probably that it would start with an exchange of pleasantries and then be followed by some serious discussion. Of course, nobody would know what the two touched upon during their closed-door meeting. That was not to be.

Before the UN special envoy, Noeleen Heyzer, left Nay Pyi Taw after meeting with Senior General Min Aung Hlaing, she released a two-page press statement detailing her encounter with the junta, officially known as the State Administrative Council (SAC), which seized power in Myanmar in February 2021. All the points she made and on which she pressed the junta are well-known.

In a nutshell, she completed her first ever mission by delivering the UN’s concerns about the dire situation inside Myanmar, which needs the full cooperation of the SAC to de-escalate the violence and the so-called “multidimensional crisis” that followed the coup. The UN also urged the SAC to impose a moratorium on all future executions and release all political prisoners.

During the meeting, she requested to meet with Daw Aung San Suu Kyi and asked for her to return home soon as she is the critical stakeholder with whom to engage. There was a sense of deja vu about the outcome last weekend as news reports from Nay Phi Taw stated that the junta’s chief was open to negotiations with Suu Kyi to end the quagmire. Lest we forget, after the coup, the UN special envoy on Myanmar has been trying to visit Myanmar. Heyzer’s predecessor, Christine Schraner Burgener, was denied entry to Myanmar.

However, on Friday, the Global New Light of Myanmar published the so-called “full description”, a 4,954-word record, of the meeting on 17 August, which put a spanner in the works. Since it was not the so-called verbatim transcript, it was possible that certain parts of their exchanges could be omitted and misinterpreted, depending on the Information Team of the SAC. It is obvious as the sunrise in the morning that the regime decided to retaliate against the UN by telling its own version.

The sudden turn of events was unprecedented since it was the special envoy’s first visit. After all, it is not normal to have the record exposed in the media in such a dramatic way, especially in the state media unless there are bigger ulterior motives in Nay Phi Taw. Given the circumstances, there are several takeaways from the spat, apart from the junta’s strongly held positions on the current situation in Myanmar, which could impact the long-term relations between the UN and the SAC as well as the current cooperation with Asean.

First of all, although the visit was viewed as focusing on “trust and cooperation” building, the reports showed that the UN and the junta are still a world apart. Both sides had their most important messages delivered. The UN wanted the SAC to stop violence and release all prisoners, amongst other demands. In response, Senior Gen Min Aung Hlaing had an unequivocal clear message to the UN, that the current UN credentials accorded to the previous government must change. Since the coup, the UN seat has remained occupied by Kyaw Moe Thun, who was appointed by the previous government under the National Leagues of Democracy. For the SAC, this change would be its top priority.

From the disclosure, the SAC lamented the lack of assistance by the international community, especially the UN, which is supposed to provide humanitarian assistance to all without discrimination. His criticism of the UN humanitarian role came as Secretary-General Antonio Guterres was undertaking shuttle diplomacy to ease the tension and food crisis resulting from the war in Ukraine. The SAC wanted to see the UN adopt new approaches to engaging with them.

Surprisingly, the senior general also felt uneasy about the mounting pressure from the Asean family. He also singled out the bloc’s humanitarian wing, the Asean Coordinating Center for Humanitarian Assistance on disaster management (AHA Center) which has “only rendered a little assistance to Myanmar”. This was intriguing that he mentioned it.

The SAC is supposed to work with the AHA Center, under the new Executive Director, Lee Yam Ming from Singapore, to complete a comprehensive action plan to deliver humanitarian assistance to the people of Myanmar affected by the conflict as well as the Covid-19 pandemic. The AHA Centre and Myanmar’s Task Force under the leadership of Minister of International Cooperation, Ko Ko Hlaing, have met with the officials of AHA Center on several occasions in Nay Phy Taw and Phnom Penh.

The broadside against Asean aside, the junta leader deliberately credited three bordering countries—Thailand, China, and India—for helping the regime during times of need, which has saved many lives. Strange as it may seem, one border neighboring, Bangladesh, was not mentioned, due to the ongoing Rohingya crisis. At the moment, the Myanmar-Bangladesh ties are under stress. In the case of Russia, the junta’s chief has no need to highlight it as it has emerged as its staunchest supporter. It was a dream come true for Moscow, which has been trying to embed itself in the heart of the Indo-Pacific, since the fall of the Soviet Union three decades ago.

Notably, the praise of the Thai humanitarian role sent a chilling effect on the Prayut government, which is facing a fresh election in the near future. Thailand is also hosting the APEC 2022 Leaders’ Meeting in November. Opposition parties and groups hostile to the current prime minister have branded him as the junta’s main cohort. The government is currently reviewing its engagement with the SAC under the new circumstance.

The “full description” also made four references to her visit and activities. One key sentence that revealed the real attitude of Min Aung Hlaing towards Noeleen, can be found in the middle of the lengthy deliberation in paragraph No. 4. Somehow the senior general slipped his tongue saying that “I do not have any personal feelings for you.” In the Burmese culture, it was tantamount to saying that “ I do not care about you.” That explained why the junta chief’s temperament could swing radically from welcoming to rejecting. As such, it is now clear that after the first encounter, his feeling has turned sour and revengeful.

First, the SAC attempts to discredit her. The final paragraph No. 17 titled “Exclusive Explanation” blamed the special envoy’s press statement for failure to fairly incorporate all their explanation, which “can cause obstacles to the constructive discussions/dialogue between the two sides. Now, it is doubtful if she would be allowed to return to Myanmar.

Secondly, he also commented on her mode of transportation from Yangon to Nay Pyi Taw saying she should have taken a car instead of flying in. “You would more realize the situation on the ground if you traveled from Yangon to Nay Phi Taw by car and looked around Yangon instead of taking the flight,” he pointed out, adding that it is “more appropriate to make comments about Myanmar only after realizing the real situation of the country.”

Thirdly, the SAC wanted her and the public to know that the “Rohingya Refugees” do not exist. The senior general made the point because she is visiting Bangladesh in the future to discuss their plight. In Myanmar, any media using the word “Rohingya” would be prosecuted. The preferred term is “Bengali.”

Finally, Myanmar, the SAC chief reiterated, is not a newcomer to the UN as it has 75-year of history and engagement. Therefore, Noeleen did not have to give him a copy of the UN Charter. He already has gotten one.

This opinion piece was written by ERIA's Senior Communications Advisor, Mr Kavi Chongkittavorn, and was published in The Bangkok Post.   Click here to subscribe to the monthly newsletter.