U Thein Sein: Asia Cosmopolitan Awards Prize is for My People 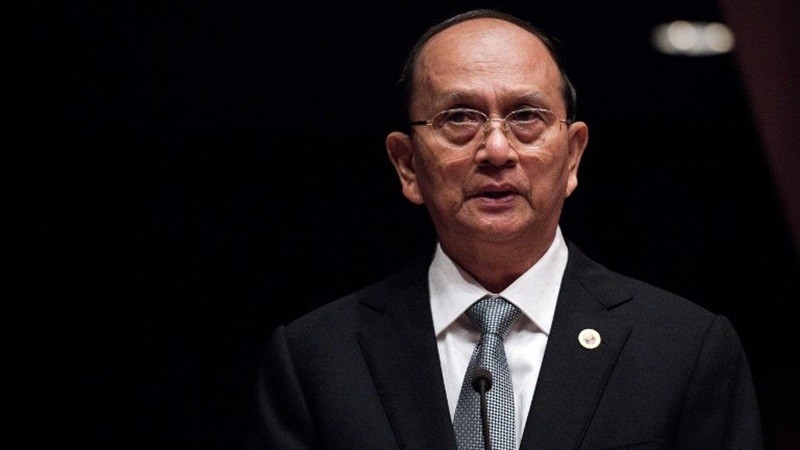 Naypyidaw, Myanmar--Myanmar's former President U Thein Sein hailed the Asia Cosmopolitan Award's Grand Prize as an honour for him and the Myanmar people.

'I am happy for the grand prize,' he told ERIA in an exclusive interview at the Headquarters of the Union Solidarity and Development Party in the capital. He is the recipient of the Grand Prize of the Third Asia Cosmopolitan Awards which will be formally presented to him at a high profile event in Nara, Japan on 15 January 2017. The Awards' citation stated that 'it is his leadership and care for domestic and international issues that make HE U Thein Sein the most suitable winner of the Grand Prize of the Third Asia Cosmopolitan Awards.' The prize, which is given every two years, recognises outstanding contributions by individuals or leaders to the economic, political, and cultural development of East Asia. The previous prize winner in 2014 was former Indian Prime Minister Manmohan Singh.

During his five-year reign, Thein Sein was credited for instituting both economic and political reforms that turned one of the world's poorest countries into one of the rising young tigers in Asia. The democratic transformation under his leadership was applauded by both the regional and international communities.

After being defeated in the polls in November 2015, Thein Sein accepted the result which enabled a peaceful transfer of power to the triumphant opposition party, the National League for Democracy, led by Daw Aung San Suu Kyi. For the first time in 50 years, the political transition had ushered in a new dawn of democracy and economic development in Myanmar.

In a wide-ranging interview, the first since he stepped down from office in April, Thein Sein was very at ease talking about his daily routine and reflected on his legacies. During the hour-long interview, the reformist leader kept repeating that he is now a free man without any worries. He smiled broadly and said that now he could sleep and wake up at any time. 'Before that, I had to think what is going to happen in the next day,' he said.

What is his routine after retirement from politics? He spends most of his time with his two grandchildren, telling them bedtime stories, tending the garden and growing vegetables, as well as watching TV series on history and culture. 'I also watched the Indian and Korean series,' he revealed. When asked whether he played golf, he answered that he did play golf previously but not at the present time.

The former president led a civilian government in the country which had been under military rule since 1962. He launched political, economic, and social reforms, including allowing more press freedom, freeing political prisoners, and concluding cease-fire accords with armed ethnic groups. It was under Thein Sein that Suu Kyi's civil liberties were restored and later she was allowed to run in a by-election in 2012, which she and her NLD candidates won overwhelmingly.

Under his leadership, Thein Sein initiated a series of measures to expand economic growth and strengthen the country's financial system. The new foreign investment law was enacted and the value of nation currency, kyat, was fixed according to the market-value. Expanding education and vocational training to improve industrial skills of the young population were also top priorities during his administration.

'Economic and politics are interlinked, so it is important to open up at the same time to bring peace and prosperity,' he said, reflecting what happened during the dramatic turnaround from 2011-2016 which witnessed Myanmar's improved economic performance and expanded its diplomatic relations with neighbouring countries and major powers.

Thein Sein reiterated that Myanmar faces key challenges that need to be tackled continuously: the peace and national reconciliation process, comprehensive economic development as well as making sure that the country can integrate with the Association of Southeast Asian Nations (ASEAN) and maintain good and balanced relations with major powers.

'Our priorities are to ensure peace and stability. Without them, we cannot develop our country,' he emphasised.

During the interview, he recalled his proud moment as the chair of ASEAN in 2014, when Myanmar successfully chaired hundreds of ASEAN meetings and kept the ASEAN interest at heart. Thein Sein revealed the three priorities during his ASEAN chairmanship--first of all, the promotion of ASEAN unity and centrality; the second acceleration and consolidation of the ASEAN Economic Community.

'Finally, it was about the situation in the South China Sea. We were able to gain consensus and issued a joint statement,' he said with a broad smile. At the time, he said ASEAN had to deal with complex relations between various claimants--on one hand between Vietnam and China and on the other hand between the Philippines and China. At the foreign ministerial levels, the debates over maritime issues were difficult and quite complicated. 'However, at the leader's level, things were much easier,' he said, adding that one of the reasons were the good personal rapports among the ASEAN leaders. Before he served as the country's president, Thein Sein served as prime minister from 2007-2011 under the military-administrated government.

After the political and social reforms, and in addition to ASEAN relations, Myanmar has quickly broadened and deepened external relations with major powers, especially the United States and the European Union. Myanmar, he said, has not abandoned old friends such as China, Russia, and India which continue to enjoy good relations.

During his administration, he managed to normalise ties with Washington, which finally brought an end to US sanctions that were in place since the 1990's. President Barack Obama visited Myanmar twice and applauded the democratic development under Thein Sein's administration. Recently, both countries have raised their relations to the level of strategic partnership.

For the future of Myanmar, the former president said he has three wishes. First, he wishes the country will be able to achieve peace and national reconciliation as soon as possible. He started the peace talks in 2012 with the hope that the nation-wide ceasefire agreement with all ethnic groups would be concluded by the end of last year. Secondly, he also hopes that his country will graduate from the list of the world's less developed country in the near future. He is proud that the country's gross national product (GNP) per capita has increased constantly. 'Back in 2011, the GNP was only US$800 and look at the figure now, it rose to US$1,270,' he stressed.

Finally, he wishes to see Myanmar achieve the status of middle-income country by 2020. He pointed out that before he left office, he pursued the comprehensive development of seven key sectors to ensure that the country is moving in the right direction to achieve the middle income status. These sectors include manufacturing, agriculture, tourism, financial service, telecommunication, infrastructure, and energy/mining.

Thein Sein highlighted the importance of improving education and vocational training of Myanmar's young people. 'We need to promote human resource development. Technically, we are twenty years behind our neighbouring countries,' he added. Myanmar has 54 million people, 55 percent of them are under the age of 30 years old. 'Now it is the new government's responsibility to continue to promote the country's economic progress,' he said.

The Nara Forum 2017 will be held on 15 January, 2017 to congratulate the laureates. This event will feature awarding ceremony, commemorative keynote speech, and dialogues by the laureates. We cordially welcome your participation. Details are available on Nara Prefecture website at http://www.pref.nara.jp/35317.htm.