The Future of Hydrogen in East Asia 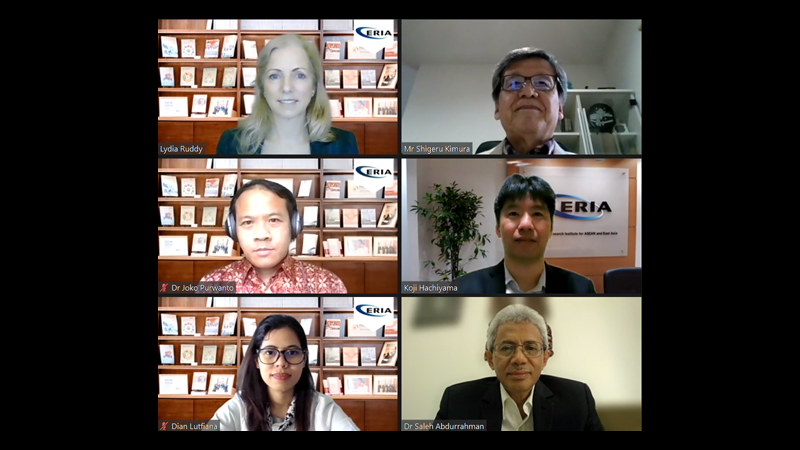 Jakarta, 13 April 2021: The Economic Research Institute for ASEAN and East Asia (ERIA) hosted a press conference on the key role that hydrogen will play in realising ASEAN and East Asia’s goal of carbon neutrality.  The event was opened by Mr Koji Hachiyama, the COO of ERIA, who introduced the context for the use of hydrogen in the region.

‘In line with the 7th Sustainable Development Goal of the United Nations, ASEAN and East Asian Summit countries need to seriously promote the use of renewable sources, energy efficiency and energy transition measures to cleaner fuels. The use of new energy technologies such as carbon capture usage and storage or carbon recycling and hydrogen should also be incorporated along with the adoption of clean technologies. Hydrogen technology, in particular, should play a key role as an alternative to fossil fuels and can be applied across sectors not only in industry but also in power generation and transportation,’ said Mr Hachiyama.

Mr Shigeru Kimura, ERIA’s Special Advisor on Energy Affairs, then presented a more detailed analysis of why and how hydrogen can be used in East Asia. In addition to power generation, hydrogen can be used in fuel cell vehicles (FCVs) for transportation and heat production in industry. Currently, power generation uses mostly coal and gas and vehicles rely on oil in ASEAN.

He noted that currently, hydrogen production is too expensive at around USD10 per kg. However, but said that it can become affordable (USD 2-3 per kg) by developing innovative technology and increasing demand.

Next, Dr Saleh Abdurrahman, Expert Staff for the Minister of Energy and Mineral Resources of the Republic of Indonesia, presented Indonesia’s perspective on hydrogen as an energy source.

‘Indonesia is committed to reach our NDC targets to reduce our emissions by 29% in 2030 and 41% with international support,’ said Dr Saleh. ‘The role of hydrogen is very significant to achieve our targets.  We can produce hydrogen from either gas or goal with carbon capture and storage (CCS) or ‘green hydrogen’ with hydro, geothermal, biomass and others.  We welcome and support the initiative by ERIA to establish this working group to find ways to cooperate to support us and countries like us to accelerate the production of hydrogen.’

‘To support the further development of innovative technology and appropriate policies, ERIA initiated the EAS Hydrogen Working Group in 2019 as a platform for EAS countries to understand each other in terms of hydrogen demand, supply, and supply chain progress in the region. The recent meeting was attended by nine participants from Australia, Brunei Darussalam, China, India, Indonesia, Japan, Malaysia, New Zealand, and Thailand. The working group members agreed on the important role of hydrogen in achieving carbon neutrality as a long-term strategy but at the same time recognised many issues and challenges regarding high utilisation of hydrogen’ he said.

The press conference ended with questions from participants.

Hydrogen as an Important Part of Carbon Neutrality for ASEAN

This press conference was covered in several media: