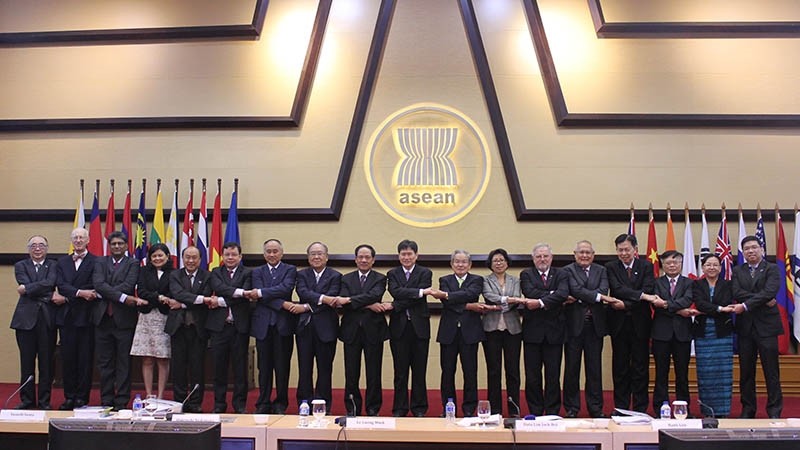 The members of the ERIA Governing Board held discussions on wide-ranging issues impacting on regional economic development with ambassadors and representatives from ASEAN+6 countries, as well as with the representatives of Mongolia, the Russian Federation, and the United States (US) in separate meetings.

The meetings were part of the 8th Governing Board Meeting (GBM), which took place at the ASEAN Secretariat on 5 June 2015. During the morning session, the GBM, as the supreme decision-making body of ERIA, adopted a statement detailing the outcome of the discussions and outlining the necessary actions that ERIA needs to focus on to contribute to ASEAN and East Asia community building.

In the afternoon, the GBM resumed, joined by Permanent Representatives from ASEAN and ambassadors from ASEAN+6 countries, which is composed of the 10 ASEAN member countries, plus Australia, China, India, Japan, Republic of Korea, and New Zealand.

Professor Hidetoshi Nishimura, President of ERIA, opened the discussion with a comprehensive report of ERIA's work over the past year. He said that ERIA will continue to promote ASEAN economic integration and expressed the hope that the ASEAN Chair, Malaysia, would be able to use the outcomes of ERIA's numerous research projects. Prof. Nishimura also emphasised that ERIA would assist Lao PDR to prepare for the ASEAN chairmanship next year.

The GBM also held separate, bilateral meetings with the representatives of Mongolia, the Russian Federation, and the US to explore areas of cooperation.

H.E. Lundeg Purevsuren, Foreign Minister of Mongolia, outlined his country's economic development policy and diplomacy. He stressed that Mongolia would like to integrate with the East Asian economy and engage in connectivity projects.

The final bilateral meeting was with the Ambassador of Russian Federation to ASEAN, Mikhail Galuzin. He said that the Russian Federation would commemorate the 20th anniversary of ASEAN-Russia relations next year in a Russian city. He expressed his country's readiness to cooperate with ERIA.