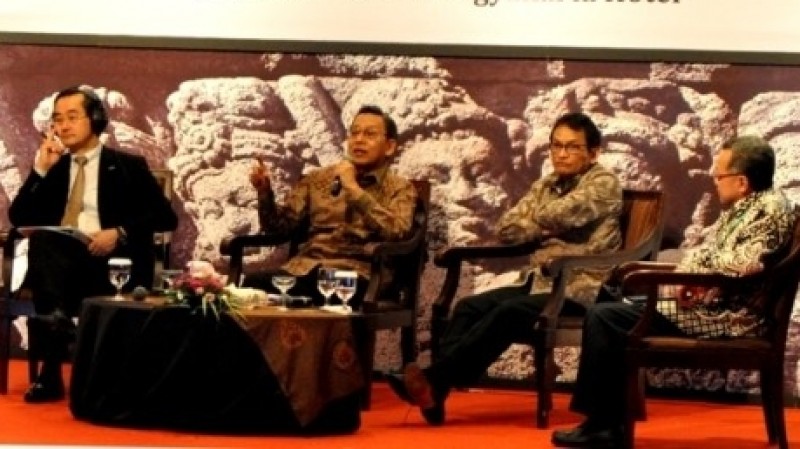 H.E.Prof.Dr. Boediono made the comment as part of the East Asia Policy Dialogue with the economists from East Asian Countries and Economic Research Institute for ASEAN and East Asia (ERIA), which is attended by more than 450 delegates from all over Indonesia.

The East Asia Policy Dialogue--the first of its kind-is designed as a forum to exchange views between the Indonesian decision makers and ERIA experts. Since its establishment in 2008, ERIA has conducted hundreds of researches on issues related to economic dynamism and integration in ASEAN and East Asia.

"Indonesia, as you know, is considered the 'rising star' among the emerging economies. Indonesia is regarded as an attractive country in terms of its market size, its firm development of sound macroeconomic policy and regulation, expansion of the middle income population. But we must find the right degree of domestic economic and financial integration to the global economy. Now, ERIA is conducting a study on 'How Southeast East should level up its value added in trade'." Prof. Hidetoshi Nishimura, Executive Director of ERIA mentioned the necessity of Indonesia's levelling up its value added in order to improve its position in the world.

After the Asian economic crisis in 1997, the trade pattern has shifted from the West to the East, especially key economies of China, Japan and South Korea, Dr. Iwan reiterated. Indonesia's intra-Asean trade has increased markedly over the past decade. "Indonesia must be part of the production chains in the region," he said.

Prof. Fukunari Kimura, ERIA Chief Economist, pointed out that given the vast resource and skill labors, Indonesia has good potential to become "the factory of the world." He said full participation in international production networks is prerequisite as well as better logistic links.

The three-hour dialogue was interactive with questions from the floor. The East Asia Policy Dialogue in Yogyakarta is the first to be held inside Indonesia.