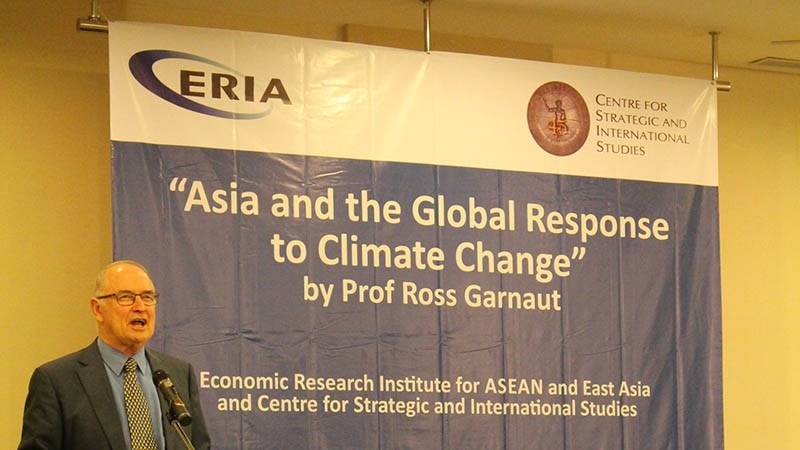 The Economic Research Institute for ASEAN and East Asia (ERIA) and the Centre for Strategic and International Studies (CSIS) hosted Professor Ross Garnaut, a Professorial Research Fellow in Economics from the Faculty of Business and Economics at the University of Melbourne, to deliver a public lecture entitled 'Asia and the Global Response to Climate Change'.

Within the last decade, major Asian developing countries such as China, India, Indonesia, and Vietnam have recorded high economic growth with electricity generation mostly fuelled by coal. This caused the region to be one of the main sources of global greenhouse gas emissions. Prof Garnaut gave an example of China's consumption of coal which totalled half of global consumption when their demand increased fourfold in the first decade of the 21st century.

At the same time, Asia is also vulnerable to climate change due to three things. First, the Himalayan region precipitation could destabilise water flow in the region's main rivers namely Yang Tze, Indus, Brahmaputra, Ganges, and Mekong, which could harm the people living alongside the rivers. Second, the rise of sea level and the ensuing extreme weather events can harm major economic centres such as Bangkok, Bangalore, Jakarta, Guangzhou, Macau, Shanghai, and Tianjin that are very close to sea level. Third, the change of precipitation patterns will pose a challenge to the agriculture sector and agricultural countries especially Southeast Asian countries.

In order to mitigate the impacts of climate change, all countries in the world need to cooperate effectively and participate in a concerted effort. Prof Garnaut used the term 'Concerted Unilateral Mitigation', adopted from the term 'Concerted Unilateral Liberalisation' coined in the APEC meeting in Bogor, Indonesia in the late 1980s. Through this scheme, countries would determine their own contributions to alleviate the impacts of climate change, which would then be discussed and reviewed in a certain period.

Prof Garnaut added that countries can take advantage of the much lower cost of reducing emission from energy production by implementing changes in institutions and policy frameworks, inventing new technologies to generate electricity from renewable sources, applying old technologies in a better way, increasing the scale of electricity production, and improving technological cooperation. He concluded the lecture by providing several examples of actionable efforts for Indonesia, such as providing hydroelectric power generation for remote areas such as in Papua and Kalimantan, adjusting the electricity pricing, and activating carbon market.

In his opening remarks, Prof Nishimura spoke of ERIA's proposal of an 'East Asia Mid- and Long-Term Energy Policy Research Roadmap' to the East Asia Summit (EAS) Energy Ministers Meeting. As part of the Roadmap, ERIA would support and provide relevant policy recommendations for each country to develop its energy policy based on Intended Nationally Determined Contribution (INDC), considering the ratification of the Paris Agreement from the Paris climate conference (COP 21).

Dr Vermonte emphasised the multi-faceted nature of global climate change issues and negotiations, stating that 'it is a matter of political, as well as social and cultural issues.' Moreover, he stated that the public lecture was important to increase awareness and understanding on climate change issues in Indonesia, especially as the country has ratified the Paris Agreement and therefore must meet the ensuing obligations.

Professor Garnaut has held various high-level positions, including when he served as the Australian Ambassador to the People's Republic of China from 1985 to 1988. He was the Head of the Economics Department and Division of the Research School of Pacific and Asian Studies at the Australian National University for over a decade from 1989. In addition, he is the author of over 40 books, monographs, articles in scholarly journals, and a number of influential reports to the Australian Government, including The Garnaut Climate Change Review (Cambridge University Press 2008) and The Garnaut Review 2011: Australia and the Global Response to Climate Change (Cambridge University Press 2011).