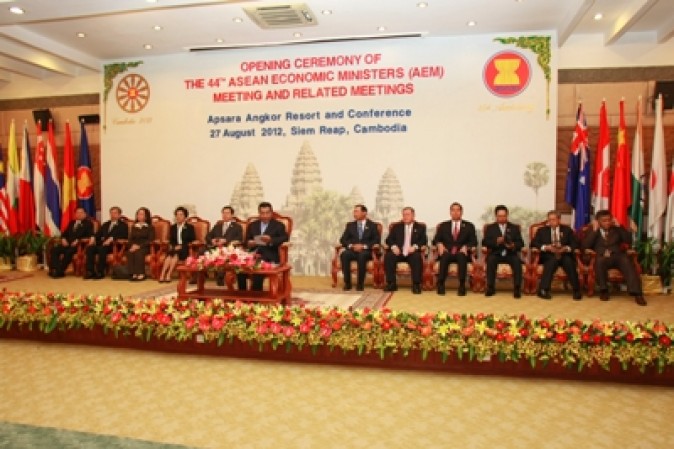 The 44th ASEAN Economic Minsiters (AEM) Meeting and Related Meetings was held from 25 August and 1 Septemeber in Siem Reap, Cambodia.

Prof. Hidetoshi Nishimura, Executive Director of ERIA, Dr. Ponciano S.Intal Jr., Senior Researcher of ERIA, and some ERIA senior officials attended the 8th ASEAN Economic Community Council Meeting on August 28, 2012 and made a presentation on the Mid Term Review of the AEC Blueprint. The Ministers overall welcomed the report and commended ERIA for successful completion of the report and invited ERIA to participate in the ASEAN Business Investment Summit to be held during the Summit in November 2012.

The East Asia Summit (EAS) Economic Ministers Meeting was held on August 30, 2012. Economic Ministers from of East Asia Summit (EAS) participating countries - the ten ASEAN Member States, Australia, China, India, Japan, Republic of Korea and New Zealand, the Russian Federation (Russia) and the United States of America (US) gathered at the meeting. Prof. Hidetoshi Nishimura, Executive Director of ERIA, Prof. Fukunari Kimura, Chief Economist of ERIA, and some ERIA senior officials attended and made a presentation to the meeting on activities of ERIA and also gave a small introduction on the need to deepening of connectivity and production networks in the region. H.E. Dr. Cham Prasidh, Senior Minister and Minister of Commerce of Cambodia chaired the meeting and initiated the discussion calling ERIA a common creation of the East Asia Summit. The Chair concluded the discussion by once again recognizing the contribution of ERIA to the ASEAN and EAS.

In the Joint Media Statement of the 44th AEM Meeting, the Ministers thanked the ERIA for its contribution of Mid-Term Review of the AEC Blueprint in paragraph 7.

Joint Media Statement of 44th ASEAN Economic Ministers' Meeting
Implementation of the ASEAN Economic Community (AEC) Blueprint
7. The Ministers thanked the Economic Research Institute for ASEAN and East Asia (ERIA) for its contribution in undertaking the Mid-Term Review of the AEC Blueprint which highlighted the progress, challenges, and recommendations in moving forward on the implementation of the AEC Blueprint.

H.E. Samdech Techo Hun Sen, Prime Minister of Kingdom of Cambodia, and H.E. Cham Prasidh, Senior Minister, Minister of Commerce of Cambodia, mentioned the efforts of ERIA in their address during the 44th AEM Meeting.

Opening Address by H.E. Samdech Techo Hun Sen at the Opening of the 44th ASEAN Economic Ministers Meeting
...First, realizing the ASEAN Economic Community by 2015 is the top priority in order to transform ASEAN to be a single market and production base, with free flow of goods, services, investment, skilled labor, and freer flow of capital. Thus, there is a need to prioritize actions and key concrete measures to address challenges and bridge the development gap, which hinders the realization of ASEAN Economic Community as planned. In this regard, I believe that the Report of the Mid-Term Review of the AEC Blueprint completed by the Economic Research Institute for ASEAN and East Asia (ERIA) can serve as a basis for the Economic Ministers to review and put forward concrete policy measures to address implementation gaps between now and 2015 including ways and means to tackle protectionism in trade in goods and services within ASEAN...

ERIA is mentioned in paragraph 6,7,8 in the Joint Media Statement of EAS Economic Ministers Meeting.

7. The Ministers, recognising that there is still scope for ERIA to do work in some other important areas, encouraged ERIA to explore expanding its research activities to other emerging areas such as on future economic challenges to sustainable growth and prosperity in the region. The Ministers also underscored the importance of systematically aligning the work of ERIA with the policy objectives of the EAS. This could be achieved through practical arrangements for engagement between policymakers and ERIA's researchers, including consultation about research topics and regular feedback from policymakers on ERIA's research and analysis. The Ministers looked forward to ERIA's continued support and contribution and recognised the importance of further strengthening ERIA to effectively contribute to economic integration and community-building in ASEAN and the greater East Asian region through its research work and policy recommendations. The Ministers appreciated contributions from ASEAN Member States, India, Japan and New Zealand to ERIA.

Regional and global economic development
8. Reaffirming their support to ASEAN's efforts towards the ASEAN Economic Community in 2015, the Ministers also underlined the importance of deepening ASEAN's economic integration beyond 2015 with enhanced participation in global supply networks. In this context, the Ministers reaffirmed their support for the effective implementation of the Declaration of the 6th EAS on ASEAN Connectivity, and anticipated ERIA's further support to the ASEAN Connectivity Coordinating Committee as well as to the ASEAN Secretariat.