Outcomes of the 20th ASEAN Summit 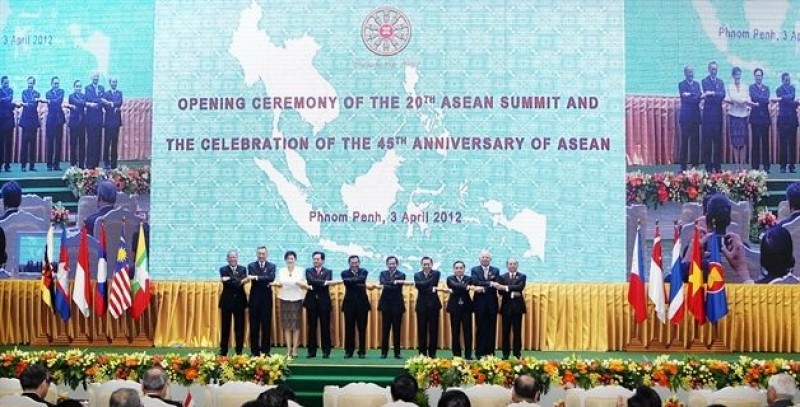 ERIA was invited to the 20thAEC Council which was held on 2 April 2012 in Phnom Penh, Cambodia. Prof. Hidetoshi Nishimura, Executive Director of ERIA and ERIA officials participated in the meeting and briefed the Council on the progresses in the AEC Midterm Review Project.

The Council appreciated ERIA's study and looked forward to hearing the recommendations at the next occasion. It was noted in the Chairman's Statement of the 20th ASEAN Summit, paragraph 36.

At the Opening Ceremony of the 20th ASEAN Summit which was held on 3 April 2012, ERIA was mentioned in the opening statement by Samdech Techo Hun Sen, Prime Minister of the Kingdom of Cambodia as below.

....Third, we should place priority on the establishment of ASEAN Economic Community by 2015, to transform ASEAN as a single market and production base, with free flow of goods, services, investment, and skilled labor. Therefore, we must lay out priority actions and key concrete measures to address all the challenges and bridge the gaps which are the obstacles for the realization of ASEAN Economic Community as planned. For this purpose, we should encourage ASEAN Economic Ministers to closely cooperate with the "Economic Research Institute for ASEAN and East Asia" in carrying out a comprehensive study to generate inputs for necessary measures to be taken to close the implementation gaps including the strengthening of institutional capacity and coordination, which could impede the realization of the AEC by 2015. ......

The AEC Midterm Review Project which was presented to 20th AEC Council on 2 April 2012 was noted in the Chairman's Statement of the 20th ASEAN Summit, paragraph 36. In addition, ERIA's efforts in the promotion of regional integration (SMEs) was welcomed in its statement, paragraph 68.

68. We also welcomed the efforts by the Economic Research Institute for ASEAN and East Asia (ERIA) in the promotion of regional integration with its recommendations on the role of Small and Medium Enterprises (SMEs) in the region.

In the Phnom Penh Agenda which was issued 3 April 2012, ERIA was mentioned in connection with the implementation of the ASEAN Framework for Regional Comprehensive Economic Partnership (RCEP).

2. ......While conscious of the benefits of integrating into global economy, ASEAN will play a leading role in the process of shaping the regional economic architecture through the implementation of the ASEAN Framework for Regional Comprehensive Economic Partnership (RCEP). In this regard, ASEAN shall work closely with its Dialogue Partners and external parties as well as various regional and international institutions such as the Economic Research Institute for ASEAN and East Asia (ERIA), the Asian Development Bank (ADB), the World Bank and the United Nations (UN) to carry out comprehensive studies to identify practical measures to strengthen institutional capacity, enhance coordination and address any implementation gaps which could impede the realization of an ASEAN Economic Community by 2015.

In the Joint Statement of 8th BIMP-EAGA Summit, paragraph 11, the leaders of Brunei Darussalam, Indonesia, Malaysia and the Phillipines appreciated the support of ERIA especially in transport and logistics development.

11.  We look forward to a more dynamic engagement by all stakeholders to establish joint venture undertakings to move forward the sub-region's existing relations with China and Japan. We also appreciated the support of the Economic Research Institute for ASEAN and East Asia (ERIA) especially in transport and logistics development.