Meeting with Mr. Truong Tan Sang, Permanent Member of Politburo of the Communist Party of Vietnam 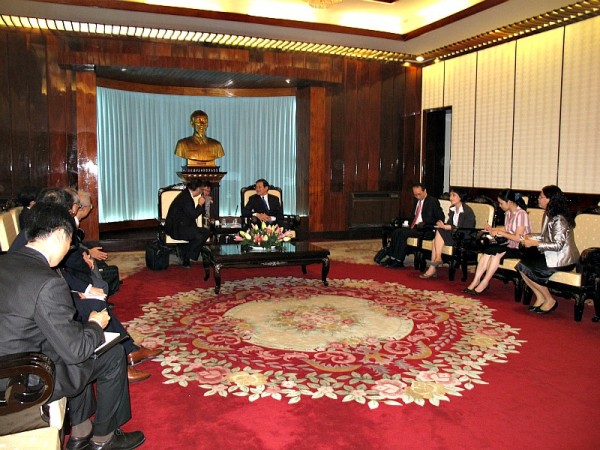 ERIA delegates let by Mr. Hidetoshi Nishimura, Executive Director of ERIA called on Mr. Truong Tan Sang, Permanent Member of Politburo of the Communist Party of Vietnam on 20 July 2011.
Mr. Nishimura thanked Mr. Sang for the opportunity to brief on the current situation in Japan and ASEAN related matters. He touched on the Japanese policy on nuclear energy after the Great East Japan Earthquake and mentioned about ASEAN-Japan 10 year Strategic Plan which was discussed at 1st AEM-METI-FJCCIA Meeting on 9 July 2011 in Kuala Lumpur. In that connection, Mr. Nishimura stressed that better investment climate is necessary for Japanese companies to further investment in ASEAN.
Mr. Sang sincerely wished for a quick recovery of Japan from the recent disaster and applauded the good relation between Vietnam and Japan that will be always maintained and hoped that both countries would be double their trade in the coming 10 years. He appreciated the research result of ERIA and expressed his expectation for ERIA's further contribution in ASEAN region. He also suggested Mr. Nishimura to further support CIEM to conduct research on the future Vietnam and Japan's Economic Cooperation in the future.
During the meeting, an informative discussion was conducted in order to strengthen the competitiveness of Vietnam for contributing to more balanced development in the region while regional integration is increasingly active.