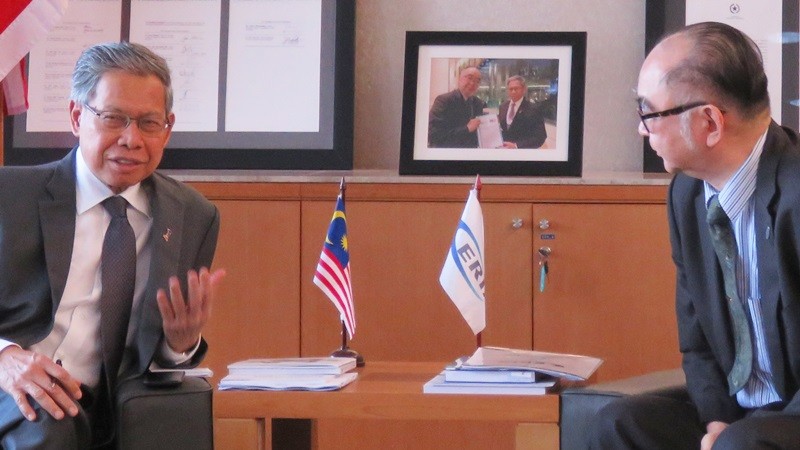 The President of the Economic Research Institute for ASEAN and East Asia (ERIA), Prof Hidetoshi Nishimura, welcomed H.E. Dato' Sri Mustapa Mohamed, the Minister of International Trade and Industry of Malaysia to ERIA's offices on the 12th of June 2017. The Minister was accompanied by a delegation of government officials and representatives from Malaysian companies.

After welcoming remarks by Prof Nishimura, Tan Sri Dr. Rebecca sta Maria, ERIA's Senior Policy Fellow, provided a brief overview of ERIA's work with ASEAN and how it is related to Malaysia. The Minister then spoke about his visit to Indonesia with a large delegation from the private sector and the importance of trade facilitation and non-tariff measures (NTMs). In particular, he referred to the fact that the work on NTM's by ERIA Senior Economist Lili Yan Ing had been raised by the Prime Minister of Malaysia who would like a set of indicators, 'like a scorecard', for trade facilitation. Minister Mustapa stated that he wanted to encourage greater open and transparent dialogue on NTMS and trade facilitation.

Dr Lili Yan Ing then gave a short presentation on NTMs, emphasizing the fact that NTMs should not be automatically perceived as bad, but should be understood as 'precautions, not protectionism.' Governments in ASEAN should be able to have clear standards for health, safety, and the environment based upon solid evaluation and analysis.

The Minister agreed that ASEAN could move up as a region if higher standards were in place and suggested that this needed to be presented to the Economic Ministers for discussion about which NTMs are necessary and which ones result in red tape.

Dr Ponciano Intal then gave two short presentations. Frist, he discussed the ASEAN Trade Facilitation Index that ERIA is working on at the request of the Philippine's Government as one of their deliverables as Chair of ASEAN this year. Second, Dr Intal provided an overview of ERIA's ASEAN at 50 project which includes a commemorative five volume set of books as well as a series of seminars and high-level forums.

The Minister and his delegation were then given a tour of ERIA's offices before departing.