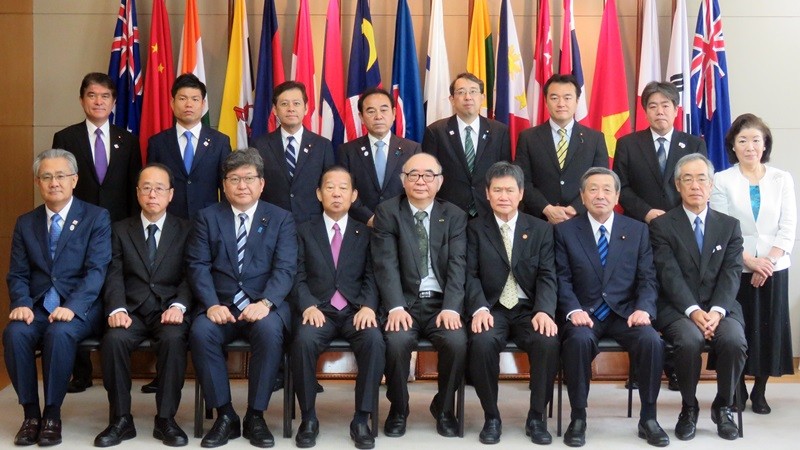 Mr Nikai was in Jakarta as the special envoy on behalf of Prime Minister Shinzo Abe to celebrate the 60th anniversary of bilateral ties between Indonesia and Japan. Considered the 'father of ERIA' since he conceived ERIA as the 'OECD of East Asia' in 2006, Mr Nikai was pleased with ERIA's progress over the past ten years since it was created.

'It gives me a great pleasure to see that ERIA has extended its activities and received high international recognition as I engaged in the launch of ERIA,' said Mr Nikai.

Mr Nikai was accompanied by a delegation that included Ambassador of Japan to ASEAN Amb Kazuo Sunaga, Ambassador of Japan to the Republic of Indonesia Amb Masafumi Ishii, as well as other diplomats and dignitaries. The new ASEAN Secretary General Dato Paduka Lim Jock Hoi also joined the meeting. After a meeting in ERIA's Chairman's room to discuss ERIA's past achievements and future plans, Mr Nikai and his delegation proceeded to ERIA's newly opened Information Centre. Mr Nikai viewed ERIA's publications and a short video about [email protected], ERIA's signature project in 2017 with the Philippines government who was chair of ASEAN during its 50th anniversary.

Members of the Delegation