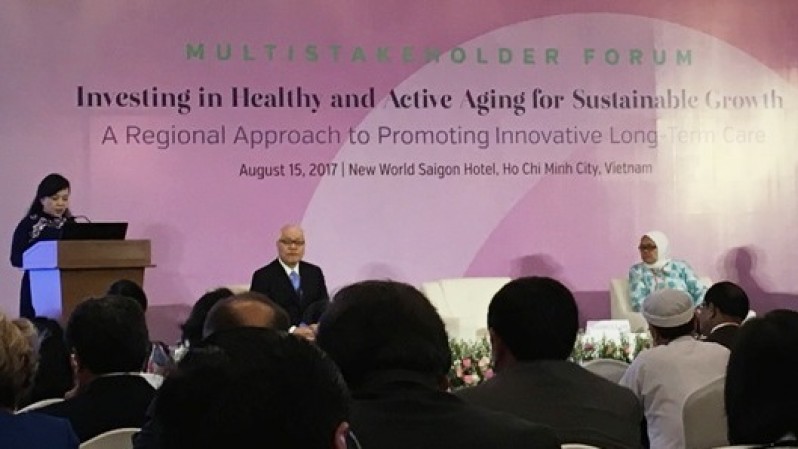 One of the key challenges faced by the Asia Pacific region is rapid population ageing, which will pose economic challenges as well as trigger various health and human security issues.

Therefore, there should be a concerted effort in the region to ensure the welfare costs would be sustainable and to improve the resilience of the communities, as discussed in a multi-stakeholder forum held on the sidelines of APEC Senior Officials' Meeting (SOM) in Ho Chi Minh City, Viet Nam, on 15 August 2017.

The forum, which was held with the theme Investing in Healthy and Active Aging for Sustainable Growth: A Regional Approach to Promoting Innovative Long-Term Care, was organised by the Government of Japan, the Government of Viet Nam, Asian Forum of Parliamentarians on Population and Development (AFPPD), HelpAge International, Japan Center for International Exchange (JCIE), Japan External Trade Organization (JETRO) and the Economic Research Institute for ASEAN and East Asia (ERIA).

In his keynote speech, Mr Keizo Takemi, the Member of House of Councillors, Japan and the Chairperson of AFPPD stated that the Forum has two main objectives. First, to deliberate on how to prepare for the upcoming big waves of population ageing in the region. The first objective focused on three key issues, namely the role of community for long-term care and public-private-civil society partnership; the regional innovative approach for the capacity development of professional care workforce through the cross-border movement; and a collaboration among APEC members to deal with the different waves of ageing. The second objective of the forum was to exhibit Japan's latest technological innovations for elderly care.

Moreover, Mr Takemi mentioned that there were three impacts of an ageing society to a country's population. The first impact is a growing danger of non-communicable diseases as the cause of deaths. According to the World Health Organisation, non-communicable diseases are diseases that have a long duration and a slow progression pace, such as cardiovascular diseases, cancer, chronic respiratory diseases, and diabetes. The second impact is that there will be a lot of ageing poor people. The third impact is a shortage of care workers. He further discussed ways to develop and allocate the human resources for long-term care.

'People have pursued longer life, and even eternal youth, since the beginning of our history. Development in the past centuries, mainly because of progress in medical science and public health, has enabled us to somehow obtain the tools to control fertility and mortality. From the perspective of demographic and health transition, ageing is ultimately the result of human beings' success in living healthy lives. So I would like to say that ageing has to be considered positively, not negatively,' said Prof Nishimura.

He added that ERIA would like to play a leading role in harnessing the knowledge, practice, and policymaking needed to address this challenge.

The forum was attended by more than 250 people from 27 economies in the region, representing diverse stakeholders, namely parliamentarians, government officials, and representatives from international organizations, academia, civil society organizations and the private sector.