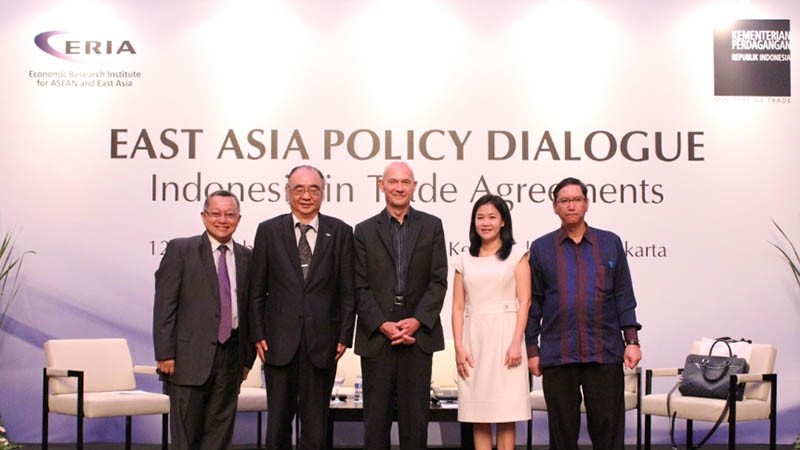 Jakarta, Indonesia - 12 September 2014: Economic Research Institute for ASEAN and East Asia (ERIA), together with the Ministry of Trade of the Republic of Indonesia, organized the East Asia Policy Dialogue on the topic 'How can Indonesia gain benefits from regional agreements?' in Jakarta, Indonesia.

To improve the country's economic competitiveness, Indonesia must welcome free trade agreements and connect to the world markets, according to H.E. Muhammad Lutfi, Minister of Trade of the Republic of Indonesia.

"Empowering trade is a fact of life," H.E. Lutfi said in his opening remarks at the East Asia Policy Dialogue: Indonesia in Free Trade Agreements.He was upbeat with Indonesia's potential in joining the ASEAN Economic Community (AEC). "But at the same time Indonesia has to do more," he added. ASEAN is expected to realize the AEC at the end of 2015.H.E. Pascal Lamy, the Honorary President of Notre Europe - Jacques Delors Insitute, former Director-General of World Trade Organization, also shared this view stressing that open trade system will benefit the country. Therefore, it is important that Indonesia continues to be part of the efforts to promote trade through free trade agreements.H.E. Lamy, said in his keynote speech that it is important for ASEAN countries to adopt a system of harmonization of standards to ease intra-Asean trade as well as to maintain dialogue with partners as ways to capture market shares in the global value chains.

In his welcome remarks, Prof. Hidetoshi Nishimura, Executive Director, emphasized, "ERIA will continue to work for the realization of the AEC, including providing the support for RCEP negotiations"

More than 150 representatives from ministries related to economic affairs, private sectors and academia took part in a very active and informative dialogue. This seminar was the second of the East Asia Policy Dialogue series organized by ERIA. The first time was held in Yogyakarta with H.E. Boediono, the Vice President of the Republic of Indonesia on 'How does Indonesia manage to level up its value added and improve trade competitiveness?' on April 17, 2014.

To see the pictures of the event, please click on the following PDF file:

To see the pamphlet of the event, please click on the following PDF file: