Indonesia and Japan Explore Further Political and Economic Cooperation Towards 2045 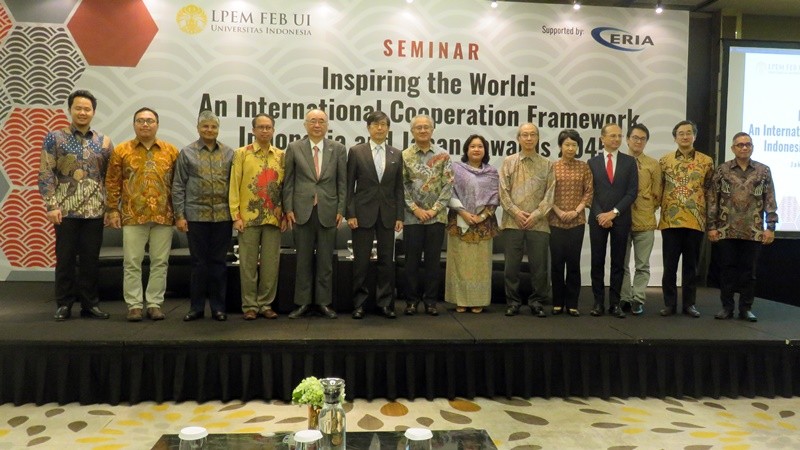 Jakarta, 11 February 2019: Indonesia and Japan are looking to enhance their political and economic partnership as the two countries explored bilateral potentials in a seminar titled ‘Inspiring the World: An International Cooperation Framework of Indonesia and Japan towards 2045’.

The seminar was held by LPEM-FEB UI and supported by the Economic Research Institute for ASEAN and East Asia (ERIA) on Wednesday in Jakarta. The event aimed to promote peaceful, prosperous and equal people-to-people cooperation in the Asia-Pacific region, and at the same time focused on the progress of the bilateral partnership between Indonesia and Japan as two of Asia-Pacific’s largest economies.

Japan and Indonesia are prominent economic partners to each other, with their bilateral trade totaling US$31.5 billion in 2019. Japan is also the third largest FDI source for Indonesia, with $4.3 billion inflow recorded in the same year.

Japan was also one of the first countries enter into a partnership with Indonesia through the Indonesia-Japan Economic Partnership Agreement (IJEPA), which had been in effect since 2008.

In his opening remarks, Prof Hidetoshi Nishimura, President of ERIA, said the seminar followed-up on ERIA’s joint project Indonesia-Japan Partnership towards 2045, which commemorated the 60th anniversary of diplomatic relations between Indonesia and Japan and was supported by the Japanese Government and the United Nations Development Programme (UNDP).

Prof Nishimura invited participants to strive to achieve three main goals by 2045, namely, to uphold democracy in order to become global maritime powers, to become members of the world’s top five economies, and especially for Indonesia to enjoy high quality of life beyond SDGs 2030.

Acknowledging the Indo-Pacific strategy as an important element of resilience in the region, Prof Nishimura said, ‘the Indo-Pacific becomes an increasingly important region because it is home to some largest economies in the world. Indonesia has led the initiative in shaping the new development concept of this region, with a more realistic and action-oriented foreign policy.’

The seminar was divided into two sessions. The first session centred on the political aspects of potential regional cooperation in the Asia-Pacific in general, while the second discussed the economic aspects, focusing on sustainable export promotion and investments.

Prof Kimura highlighted the use of technology in advancing cooperation between the two countries and for the overall region. One of the challenges, he said, was balancing the high costs of introducing robots and artificial intelligence against the efficiency potential from automation.

Further, Prof Kimura also raised issues on how many countries, even the more developed ones, have specific policies and definitions on data-related matters, particularly cybersecurity and privacy.

Prof Urata raised issues about Indonesia’s productivity management with the booming working-age population in the country. He suggested that the labour force should stay flexible and always keep up with the rapid technology development in the labour market to prevent their skills from being outdated.