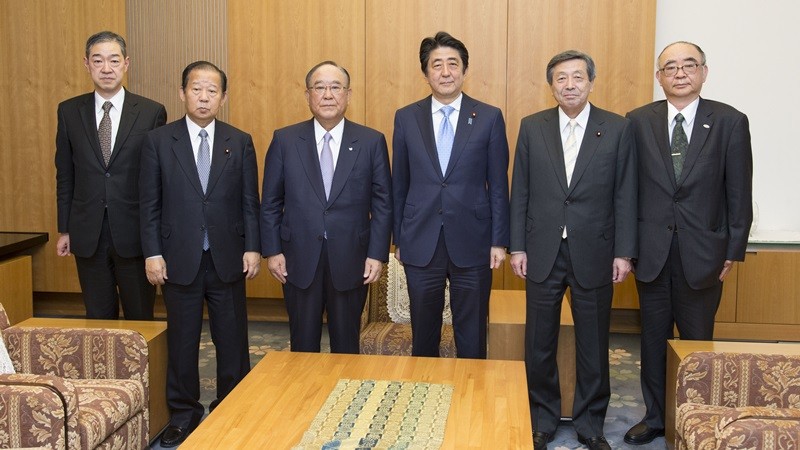 Professor Hidetoshi Nishimura, President of the Economic Research Institute for ASEAN and East Asia (ERIA), paid a courtesy visit to Deputy Prime Minister and Finance Minister Taro Aso on 15 March 2016 and to Prime Minister Shinzo Abe the next day.

He was joined by Mr Toshihiro Nikai, Chairman of the Parliamentary League for ERIA and the General Council of the Liberal Democratic Party of Japan; Mr Motoo Hayashi, Minister of Economy, Trade and Industry; and Mr Fujio Mitarai, Governor of ERIA for Japan and Chairman and CEO of Canon, Inc.

President Nishimura expressed his sincere appreciation to the Government of Japan for their support over the years and briefed them on the outcome of the First Extraordinary ERIA Governing Board Meeting held on 12 March 2016 in Tokyo. He explained the discussions among the governors at the meeting regarding the future strategy of ERIA and requested further strong support to ERIA from the government as the largest donor to ERIA.

Mr Nikai, Mr Hayashi, and Mr Mitarai explained ERIA' s past achievements to Mr Abe and Mr Aso. In response, Mr Aso asked ERIA to continue bringing robust results. Mr Abe recalled mentioning ERIA at the Ministerial Council Meeting of the Organisation for Economic Co-operation and Development in May 2014 and recognising the Institute's activities over the years.

The courtesy calls to Mr Abe and Mr Aso would pave the way for ERIA to finalise its future strategy at the upcoming Ninth Governing Board Meeting planned for 16 June 2016 in Jakarta.