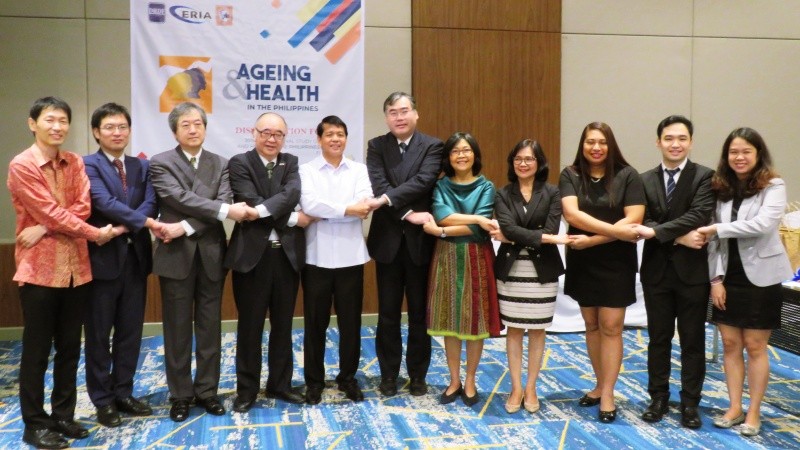 Quezon City, Manila, 9 December 2019: The Economic Research Institute for ASEAN and East Asia (ERIA),  Demographic Research and Development Foundation, Inc. (DRDF) and the University of the Philippines Population Institute (UPPI) launched the report Ageing and Health in the Philippines: Findings of the 2018 Longitudinal Study on Ageing and Health in the Philippines (LSAHP) at the Park Inn by Radisson in Quezon City. The forum was attended by over 90 participants from government ministries, international organisations, research institutes, health professionals, and organisations providing services for older people. Congressman Carlos Isagani Zarate of the Bayan Muna Party-List and National Scientist Mercedes B. Concepcion also attended the event.

The Longitudinal Study on Ageing and Health in the Philippines (LSAHP) is an ERIA study related to Asia Health and Wellbeing Initiative (AHWIN) and the first longitudinal study to be conducted targeting older persons (OPs) in the Philippines. This study was designed to trace individuals who are aged 60 years or over for a period of time in order to investigate the health status and well-being of older persons. The data obtained will enable researchers to assess the determinants of certain health outcomes and transitions in health status, as well as the overall wellbeing of older persons in the Philippines. These data will be a valuable resource for the crafting of evidence-based policies and programmes for this sector of the population.

The report includes the findings from the 2018 LSAHP baseline survey (the 2018 LSAHP) and provides an updated profile of older Filipinos, focusing on their health and well-being, as well as on their caregivers and adult children. The analysis focuses on outcome indicators of various dimensions of health and well-being, categorised by age and sex of older person respondents.

Undersecretary Juan Antonio Perez III of the Commission on Population and Development said that the Philippines must shun age discrimination and look at older Filipinos as ‘a resource rather than a burden,’ since the country faces rapid urbanisation.

‘Truly, our OPs are not yet tired despite retirement. They can still be our partners in development work,’ he said.

Deputy Assistant Minister for International Policy Planning of Ministry of Health, Labour and Welfare of Japan Mr Hiraiwa Masaru expressed his hope that the 2018 LSAHP would be thoroughly utilised.

In his message, Prof Hidetoshi Nishimura, President of ERIA, said the 2018 LSAHP is an important study as the key to coping with ageing is improvement in health expectancy and the findings of the 2018 LSAHP is a beautiful and comprehensive information of the lives of the OPs in the Philippines.

Furthermore, Prof Nishimura mentioned that the 2018 LSAHP was cited at the recent G20 Health Ministers Meeting, which was held in Okayama, Japan, in October 2019. G20 is a forum of 19 countries and the European Union that together represent most of the world economy.

An early morning visit before the forum by Secretary Rolando Joselito D. Bautista of the Department of Social Welfare and Development (DSWD), and a scheduled meeting with Department of Health Secretary Francisco Duque III in the afternoon after the forum, are two examples among the many positive feedbacks sparked by the report.

A representative from the Commission of Human Rights (CHR) said that CHR would make sure to cite the study to protect the rights of OPs. Teresa S. Cleofe, DSWD Focal Person on Senior Citizen Sector recommended the next interview of OPs include a probe of any experience of abuse. Should there be any, she cited RA 11350 or the National Commission of Senior Citizens Act, which protects the senior citizens and allows them to exercise their rights.