ERIA Participates in the Tenth Edition of Delhi Dialogue 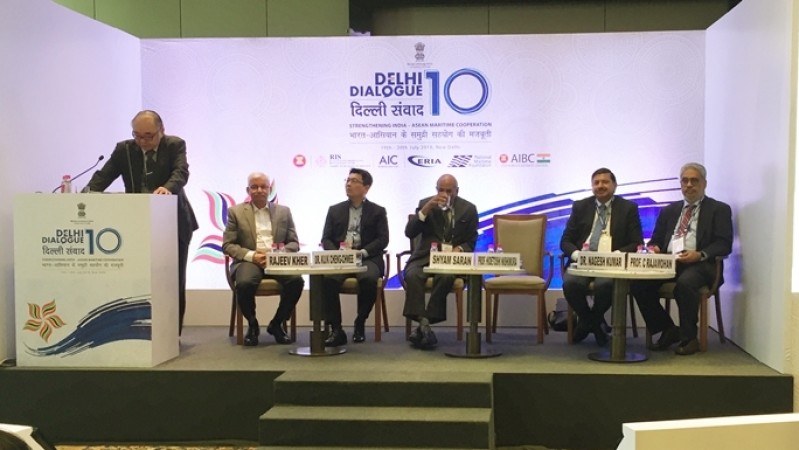 The event opened with a roundtable with Chief Ministers of North East India, in which the Chief Ministers discussed priorities and opportunities for strengthening cultural and economic ties with ASEAN. Other topics discussed at the event included increasing connectivity between ASEAN and the North East of India, strengthening socio-cultural links through student exchanges and think tank initiatives, taking responsibility in shaping the world order amidst rising protectionism, creating a framework for maritime cooperation, and investing in technology, regional development, SMEs, tourism and smart cities.

Prof Hidetoshi Nishimura, President of ERIA, presented the findings of the Second ASEAN-India Blue Economy Workshop, held the day before the Delhi Dialogue X in New Delhi. This workshop was of particular significance to the Delhi Dialogue’s theme of maritime cooperation, as the workshop presented specific recommendations on how to strengthen the links between India and ASEAN on maritime issues, such as security, commerce, and port development.

Prof Nishimura also gave a special address on the current state of trade and globalisation. He called on ASEAN and India to ‘take the lead in putting the trust back into multilateralism’. He also underlined that India and ASEAN have a special role in early conclusion of the Regional Cooperation Economic Partnership (RCEP) negotiations. Prof Nishimura further stressed the importance of promoting multilateralism, enhancing maritime connectivity and expanding the global value chains through Asia Africa Growth Corridor (AAGC), in an interview for ‘Global Review’, which was aired on the Lok Sabha TV.

The Delhi Dialogue X was co-sponsored by ASEAN, the Ministry of External Affairs of the Government of India, Research and Information System for Developing Countries (RIS), ASEAN-India Centre at RIS, ASEAN-India Business Council, National Maritime Foundation and Economic Research Institute for ASEAN and East Asia (ERIA). ERIA has been a partner of Delhi Dialogue since 2009.