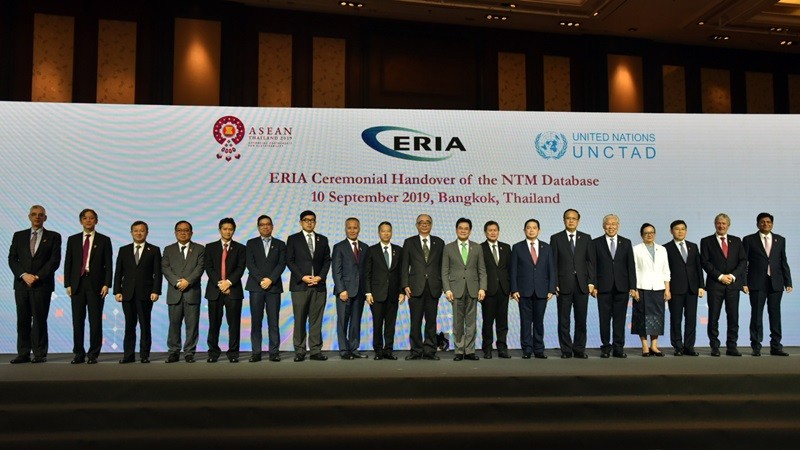 In his opening statement, Prof. Hidetoshi Nishimura thanked all the Economic Ministers for providing the opportunity to present ERIA’s work and expressed appreciation for their continued support of ERIA’s work.

Premised on the awareness that EAS Member Countries could be global pace setters in regulatory and institutional cooperation in adapting to the digital revolution, Prof. Nishimura emphasised the need for effective policy measures, proposing three main strategies:

Prof. Nishimura closed ERIA’s briefing to the Ministers by stating that ERIA is willing to respond to any request to enhance regional cooperation and concerted regulatory reform geared towards digital transformation in this region.

ERIA was very pleased to note that the Ministers stated the importance of harnessing the digital revolution to facilitate trade and to enhance inclusive growth in the 5th paragraph of their Joint Media Statement:

ERIA was also very pleased that the Ministers commended ERIA’s work in paragraph 8 of the same Joint Media Statement:

Side Event: ERIA Ceremonial Handover of the NTM Database, 10 September 2019

On the sidelines of the AEM and EAS Meetings, ERIA organised a ceremony to hand over the updated Non-Tariff Measures Database developed by ERIA together with the United Nations Conference on Trade and Development (UNCTAD). Prof. Nishimura handed over the database to Dato Paduka Lim Jock Hoi, the Secretary General of ASEAN, as EAS Ministers and high-level officials witnessed the event.

Dato Lim expressed his appreciation for the hard work of ERIA and UNCTAD in developing the Database. Moreover, he noted that the Database also complement other ASEAN trade facilitation initiatives such as ASEAN Solutions for Investments, Services, and Trade; ASEAN Trade Repository; ASEAN Single Window; ASEAN Customs Transit System; and ASEAN-Wide Self-Certification.

‘The Database is a core ASEAN effort in tackling Non-Tariff Barriers in the region, aimed at facilitating trade and simplifying cross-border procedures. Having the Database is crucial, as it will support ASEAN exporters in understanding and complying with trade formalities and regulations that apply to their products. This effort can also help MSMEs improve their competitiveness, by having direct access to reliable and fully validated NTMs. This would, in turn, facilitate more regional firms, including MSMEs, to trade and integrate within regional and global value chains, expanding the benefits of the AEC in promoting inclusive growth and sustainable development,’ said Dato Lim.

Prof. Nishimura held a bilateral meeting with Dr Ceferino S. Rodolfo Jr, Undersecretary of the Department of Trade and Industry (DTI) of the Philippines to report on the publication of ASEAN Vision 2040, ERIA’s recent project with the Government of Thailand as ASEAN Chair and was also one of the last major research projects of the late Dr Ponciano S. Intal Jr.  Prof. Nishimura spoke highly of Dr Intal’s contribution and his leadership in ERIA.

He also reported on the progress of the ASEAN Seamless Trade Facilitation Indicators (ASTFI) project which had been initially requested by the Philippines Government in 2017.  ERIA has already completed the baseline study of in consultation with ASEAN Member States (AMS) which was reported to ASEAN Trade Facilitation Joint Consultative Committee (ATFJCC) in 2018.  Prof. Nishimura also requested the cooperation of the Government of the Philippines to continue the support for this effort, as well as in providing the necessary data on the Time Release Study to complete the assessment of the Trade Transaction Costs.

Prof. Nishimura also asked for guidance regarding a possible region-wide study after the completion of the Regional Comprehensive Economic Partnership (RCEP). He also spoke on ERIA’s ongoing study, Impact of ASEAN Economic Integration, as well as the Comprehensive Asia Development Plan (CADP) 3.0 which will include digital economy, ageing society, disaster risk reduction and energy in addition to infrastructure which had been the focus of CADP 1.0 and CADP 2.0.

The Undersecretary expressed the DTI’s  sadness at the passing of Dr Intal and expressed deepest condolences to ERIA. Regarding the work of ERIA, he was happy to note that Dr Intan Murnira Ramli and Mr Salvador Buban, ERIA’s Policy Fellows, would continue the policy-oriented work and stated that DTI is willing to support ERIA’s activities. With regard to CADP 3.0, Dr Rodolfo indicated the DTI’s support given the situation in the Philippines and also having a particular interest in the development of e-vehicles. He also thanked Prof. Nishimura for the good working relationship with Mr Adrian Cristobal and wished that ERIA could perhaps look into or conduct an assessment of globalising MSMEs under the Boracay Action Agenda on MSMEs initiated by the Philippines, during its 2020 APEC Chairmanship.