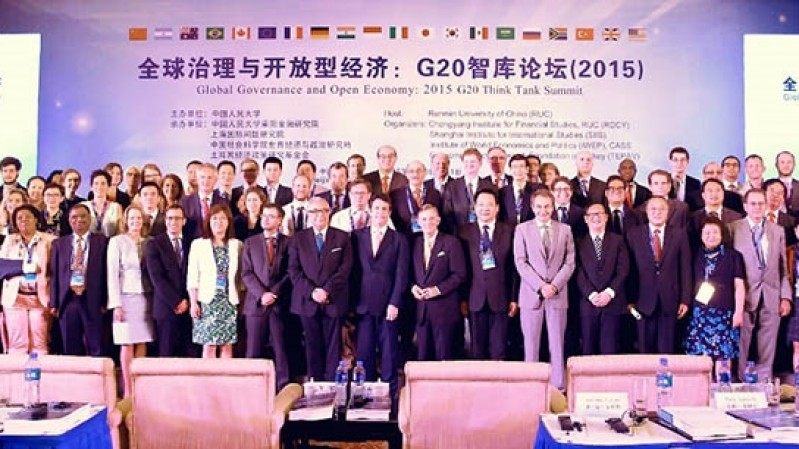 Inclusiveness, implementation, and investment for global economic growth will be the focus of discussion at the G20 summit to be held in Antalya, Turkey, on 15 and 16 November.

To examine the problems facing emerging economies and to find solutions, a think tank summit under the theme "Global Economy and Open Economy" was held in Beijing from 30 July to 1 August 2015. About 60 representatives from think tanks of G20 countries discussed possible paths to a strong and balanced growth of the global economy, and provided policy recommendations to the president of Turkey and global leaders.

The three-day program consisted of panel discussions on global economic renewal, global governance architecture, challenges to the G20, and the role of emerging economic powers.

Dr. Venkatachalam Anbumozhi, the Senior Energy Economist at ERIA, joined the discussions and emphasized the need for implementation of a comprehensive and sustainable growth strategy that will help to meet the growth targets previously committed.

The participants agreed to support the think tank summits as the world's independent source of information and analysis on G20 actions. The participants passed a joint statement on key issues affecting global economic growth and research cooperation.

This is the third G20 think tank summit organized by Renmin University, which is also aimed to shape the agenda of 2016 G20 leader's summit to be hosted by China. The previous two think tank summits that were held in August 2013 and September 2014 played an influential role during the G20 leaders' summit in Russia and Australia respectively, providing intellectual support for the development of G20 action agenda via passing and publicizing of joint statements.