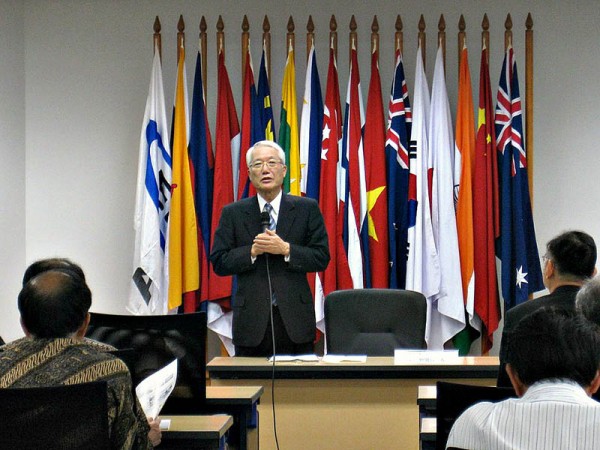 ERIA and JETRO invited Dr. Tamotsu Nomakuchi, President of AIST (The National Institute of Advanced Industrial Science and Technology), and held a seminar at ERIA Annex Office on 25 February 2011.

Around 30 audiences mostly from Japanese companies located in Indonesia were gathered the seminar.

Mr. Mitsuo Matsumoto, Managing Director for Research Affairs of ERIA, moderated the seminar and it was opened by Mr. Takashi Nakayama, President Director of JETRO Jakarta.

Dr. Tamotsu Nomakuchi explained the outline of AIST. The National Institute of Advanced Industrial Science and Technology (AIST), is a public research institution in Japan.  The present AIST is a rather new research organization established in 2001. Headquarters of AIST are located in Tsukuba and Tokyo.  It has over 40 autonomous research units in various innovative research fields, and the units are located at nine research bases throughout Japan (Hokkaido, Tohoku, Tokyo Waterfront, Tsukuba, Chubu, Kansai, Chugoku, Shikoku, and Kyushu) to contribute to regional innovation. AIST has worldwide network of major research institute in 30 countries.

It has 6 major research fields, (a) Environment and Energy, (b) Life Science and Biotechnology, (c) Information Technology and Electronics, (d) Nanotechnology, Materials and Manufacturing, (e) Metrology and Measurement Science, (f) Geographical Survey and Applied Geosciences. AIST was ranked 10th in "Top 20 Japanese Research Institutions for All Field 1999-2009" announced on April 13, 2010, by Thomson Reuters.

During the lecture, Mr. Nomakuchi stressed about the significant role of Japan's leadership in the world. He said "demographic issue of aging and shrinking population will damage Japan's national power and its economic size. But we must not forget that Japan has been contributing for the development of China, Indonesia, and other countries in Asia", and he added "ERIA's establishment is the needs of the times.