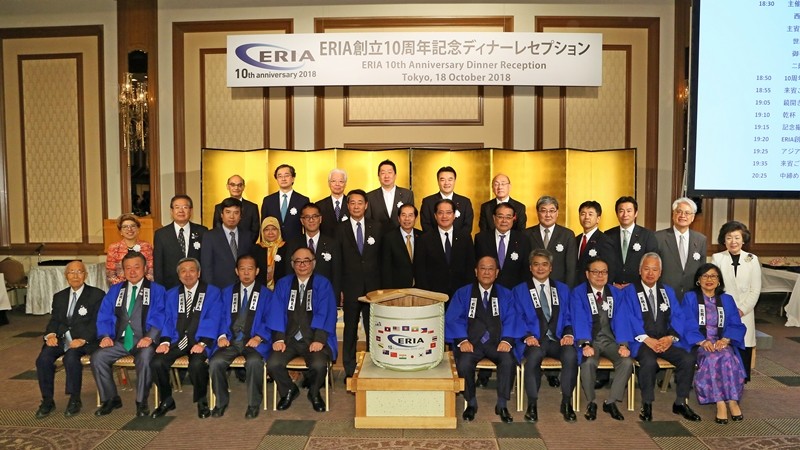 In his opening remarks, President of ERIA Prof Hidetoshi Nishimura expressed his sincere gratitude to ERIA’s stakeholders and partners, especially the Government of Japan, that have made substantial contributions to the development of ERIA in the last ten years as an international organisation, the ‘OECD in East Asia’.

The first panellist, Tan Sri Rafidah binti Aziz, Former Minister of International Trade and Industry of Malaysia, shed light on global-and regional level changes that happened in the last decade in the economic and social environments. The changes have altered the course of policies, steering many countries towards isolationism and protectionism, exemplified by looming trade war between great powers. She showed her intriguing view that ‘irrational decision making’ particularly of developed economies, which has not necessarily been based on sound economic principles, has currently generated economic distortions across borders and has negatively affected investment and trade of the world. Amidst such unanticipated events, she stressed the critical role of ERIA to promptly present well-considered policy recommendations regarding measures that can be taken to promote economic integration in cooperation with regional policymakers. She also described the necessity to start nurturing younger generations as soon as possible so that they can understand the importance of regional economic integration in East Asia.

The second speaker, Mr Adrian S. Cristobal Jr., is the Chairman of ERIA’s Governing Board and Former Secretary of Department of Trade and Industry, the Philippines. He expressed his admiration on ERIA’s strenuous efforts to expand its research horizon to energy, agriculture, health care, and other topics, while at the same time organising many high-level roundtables, symposiums, and workshops. ERIA’s efforts have resulted in its recognition as the 24th Top International Economic Think Tank according to the Global Go To Think Tank Index published by the Think Tanks and Civil Societies Program (TTCSP) of the Lauder Institute at the University of Pennsylvania. He emphasised ERIA’s unique ability to help form consensus of policies in East Asia through dialogue and discussion with leaders, ministers, and high-level officials. On the other hand, he pointed to necessary reforms that ERIA has to undertake in order to catch up with changes in intellectual and social situations. Concretely, he emphasised further work that ERIA needs to do in bridging various gaps between academic knowledge, practical policymaking, and people in general, as well as producing innovative policies that improve the whole society and reduce poverty.

Prof Fukunari Kimura, Chief Economist of ERIA, was the last person in the panel. He expressed his preparedness in cooperating with policymakers to resolve many economic and social problems in East Asia. As he explained, researchers of ERIA have put much academic input into real issues such as economic integration, non-tariff measures, technology spillovers, infrastructure connectivity, small and medium enterprise promotion, digital economies, energy, and health care; most of which are published as discussion papers, policy briefs, and newspaper articles. He showed his sense of pride in gradually enhancing the capacity of regional researchers who are involved with various ERIA projects over the years. Giving examples of possible cooperation with the countries that act as ASEAN Chair, he concluded that ERIA will need to continue working closely together with policymakers while improving the quality of its academic research.

H.E. Mr. Tadahiko Ito, Member of the House of Representatives in the Japanese Diet, Former Vice Minister of the Environment, and Former Minister of State for Disaster Management, delivered his special remarks after the panel discussion. He talked about his experience in proposing the Japan-ASEAN Environment Cooperation Initiative in 2017 in association with ERIA to address environmental issues such as air and water pollution, waste management, and urbanisation in ASEAN. He underlined the significance of encouraging ASEAN to realise the circular and sustainable society with the support of ERIA. In addition, he showed his determination to continue his commitment to ERIA as a member of the ERIA Parliament League.

In the discussion session, the panellists highlighted the importance of connectivity to develop the mindset of unity of ASEAN and East Asia. They stated that not only physical connectivity was needed, but also soft, institutional, and psychological connectivity. The Q&A touched upon economic integration through bilateral free trade agreements, the Comprehensive and Progressive Agreement for Trans-Pacific Partnership, the Regional Comprehensive Economic Partnership, and the regional initiatives of China’s One Belt One Road.

Prof Nishimura concluded the event by announcing the winners of the 4th Asia Cosmopolitan Awards (ACA). He invited two winners of the Cultural Prize, which are the art collective teamLab and renowned glass artist Ms Mieko Noguchi as representatives. The Nara Forum will be held in Nara, Japan on 10 January 2019 to congratulate the laureates. Mr Shogo Arai, the Governor of Nara Prefecture who organised the Nara Forum, also delivered his remarks.

Following the Symposium, ERIA’s 10th Anniversary Dinner Reception was held at the Imperial Hotel Tokyo attended by around 250 people who supported ERIA. In the opening, Mr Hiroshige Seko, Minister of Economy, Trade and Industry of Japan, Mr Fujio Mitarai, CEO of Canon and Japanese Governor of ERIA, and Mr Toshihiro Nikai, Secretary-General of Liberal Democratic Party, Japan and Chairman of Parliamentary Leagues for ERIA gave congratulations for ERIA’s 10th anniversary. Tan Sri Rafidah binti Aziz and Mr Adrian S. Cristobal, Jr. also delivered their remarks, including praising ERIA’s contribution to ASEAN and their expectations for ERIA’s activities in the future.