ERIA Chief Economist Discusses the Evolution of Unbundlings in Indonesia 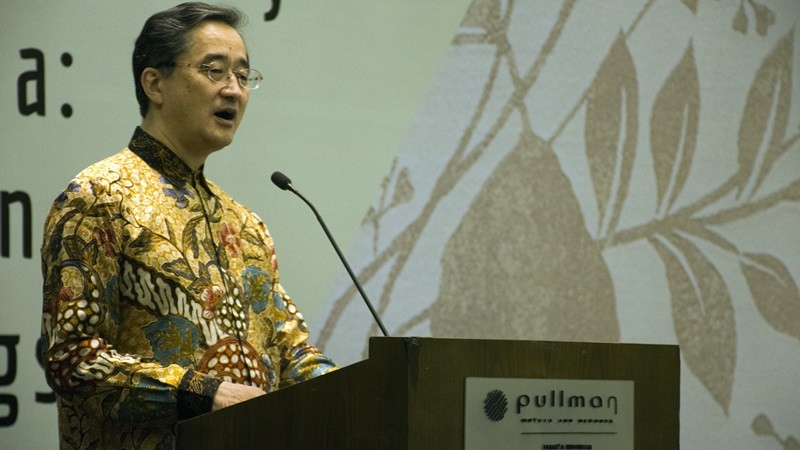 Jakarta, 2 May 2018: ‘The concept of ‘unbundling’ is especially useful in formulating development strategies of a large country such as Indonesia. The further upgrading of unbundlings and the more effective utilisation of technological feedbacks among different levels of unbundlings will enable Indonesia to achieve rapid and equitable economic development,’ said Prof Fukunari Kimura, Chief Economist of the Economic Research for ASEAN and East Asia (ERIA).

Prof Kimura delivered his lecture in the 12th Sadli Lecture series in Economic Policy on 2 May 2018 at Pullman Hotel, Jakarta. The title of his lecture was ‘Value Chain Connectivity in Indonesia: the Evolution of Unbundlings’.

He employed the concept of unbundlings and provided out-of-the-box considerations of national development from the perspective of technological progress and globalisation in the lecture. He started his speech by explaining the three distinct levels of unbundling that are backed up by technological breakthroughs to overcome geographical distance: while mass production is the backbone of the first unbundling and the second unbundling works mainly on manufacturing, the third unbundling is closely linked to the digital economy.

Based on analyses on Indonesia’s trade pattern, Prof Kimura further illustrated the economic geography in Indonesia and assessed differences in the dominant levels of unbundling across regions in the country. It showed that there are three stages of unbundling that coexist in Indonesia; thus, Indonesia needs to step up their unbundling capability and to catch up with the advancement of information technology in the world.

Finally, Prof Kimura emphasised that the wave of the digital economy has arrived in Indonesia and various business models in the third unbundling have started mushrooming. For Indonesia, first, development strategies must incorporate both the upgrading of unbundlings as a continuing agenda and the engagement in the digital economy as new challenges. Secondly, to eliminate development gaps, different regions should be able to adopt the unbundling regime that is most suitable to unleash the local potential for growth.

Prof Ari Kuncoro, the Dean of Faculty of Economics and Business Universitas Indonesia (UI), delivered the welcome remarks. And H.E. Thomas Trikasih Lembong, the Chairman of Indonesia Investment Coordinating Board and former Minister of Trade of Indonesia, delivered the keynote speech in the event.

The Sadli Lecture Series in Economic Policy is an annual lecture series held by the Institute of Economic and Social Research (LPEM) of UI in cooperation with the Indonesia Project of ANU. It is named in honour of the late Prof Mohammad Sadli, who was among Indonesia's most influential commentator on economic affairs over the past 40 years.

Value Chain Connectivity in Indonesia: the Evolution of Unbundlings from Economic Research Institute for ASEAN and East Asia