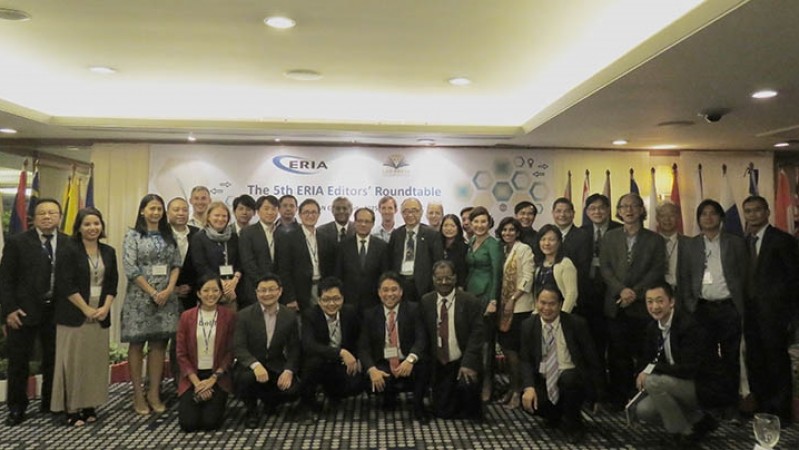 The Economic Research Institute for ASEAN and East Asia (ERIA), together with the Vientiane Times, co-organised the Fifth ERIA Editors' Roundtable to commemorate Lao People's Democratic Republic's Chairmanship of ASEAN with the theme 'The ASEAN Community 2025 Vision'. The event was held on August 8, 2016, which was also the 49th ASEAN Day, in Vientiane, Lao PDR.

Around thirty leading editors and senior journalists from ASEAN member states and other countries such as Russia, Japan, and South Korea attended the event to learn more about the issues and trends impacting the ASEAN community, while sharing their own perspectives and reflections on the future of ASEAN as it strives toward establishing a single consolidated ASEAN community.

In the first session, under the theme 'New Challenges to the ASEAN Community 2025', ERIA's Senior Economist Dr Ponciano S. Intal, Jr. delivered a presentation in which he highlighted two challenges faced by the ASEAN Community. The first challenge was to move from business-as-usual to high performance in the ASEAN Economic Community (AEC), while the second challenge was to empower the ASEAN Socio-Cultural Community (ASCC) into a 'driving' pillar that acted as an integrative glue for an inclusive, resilient, and sustainable ASEAN Community. Dr Intal emphasised how the business sector at the national and regional levels as well as non-government associations can play a significant role towards the effective implementation of AEC and ASCC Blueprints 2025. In addition, there should be a stronger, systematic, and regular monitoring and review of both blueprint measures.

ERIA's Senior Energy Economist Dr Venkatachalam Anbumozhi delivered his presentation during the second session on the Outlook of ASEAN Energy Challenges, in which he underlined the need for policy changes at the national level to ensure ASEAN countries are able to navigate a stormy energy future. Dr Anbumozhi suggested that governments provide policy stability for energy projects given the fact that most energy projects are multi-year while the budget comes from annual national budgets. He also suggested changing the perspective regarding financing by making way for private funding instead of continuously giving priority to public funding. In addition, he stated that 'energy efficiency and renewables can play a role in energy security and setting the low-carbon green growth agenda.'

Starting off the third session Role of Media: Turning ASEAN Community into a Reality, the first panellist Ms Haseenah Koyakutty began her talk by asking the members of the audience on how they felt about the role of the media, the existence of an ASEAN community, and whether they felt that they were ASEAN citizens. The audience felt strongly that the media has a role to play in forging ASEAN community; however, they felt less strongly about the existence of an ASEAN community and most did not feel that they were ASEAN citizens.

'ASEAN people don't think that there are benefits to be ASEAN citizen. At the moment, the narrative seems to be that ASEAN is disconnected and irrelevant to people's lives. The challenge is to make people feel that they have a stake in this organisation,' said Ms Koyakutty, who started an eponymous news agency Haseenah Post based in Yangon, Myanmar.

In the last session of the Roundtable, the editors and journalists had an opportunity to engage with ASEAN's Secretary General H.E. Mr Le Luong Minh through a dialogue on various topics guided by Professor Nishimura, who also delivered the concluding remarks.