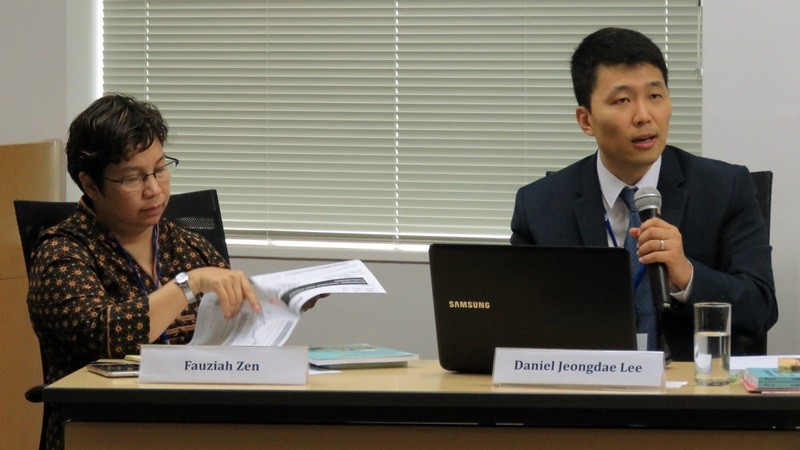 Mr Lee began his presentation by discussing the global and regional economic outlook, citing a synchronised upturn of economic growth and exports, while also warning of an increasing risk in 2018. Some of the risks he mentioned included increasing trade tensions; the financial market downturn due to currency depreciation against the US dollar; and the increasingly restrictive measures for imports).

He then posed a question, ‘in the event it turns bad, how much policy buffers do we have right now to mitigate the risks?’ He went on to share some policy recommendations, such as fiscal policies, quality of growth, as well as social protection and environmental costs.

There were four points that Mr Lee offered in conclusion. First, Asia-Pacific countries’ economic performance seems relatively stable and the countries should consider conclusiveness and sustainability in their economic growth. Second, the region’s economies are distinct and should be taken into account when considering various policies. Third, financing is a key means to effectively pursue the 2030 Agenda and should remain a priority in the Asia-Pacific region. Fourth, the prospects for mobilizing financing for development purposes are promising.

According to Dr Zen, there is a need to emphasise social protection and manage public debt. Her concern was the level of inequality within region (between countries) — the region has become more equal, but in-country inequality provided a different story (usually because increasing economic growth causes inequality in-country to go up). Therefore developing countries can focus on in-country inequality.

Dr Zen posed two considerations regarding the recommendation related to financing. First, while the role of state owned enterprises (SOEs) is important as they have significant knowledge about how to build the project, they have potential problems common to the public sector, which is lack of sanction, budget constraints, and inefficiency. Second, if the capital market is optimal, the private sector may be enticed to channel their funds into the infrastructure market and enforce market discipline. Therefore, Dr Zen suggested a need to develop and strengthen capital markets, especially in Thailand, Indonesia, Philippines, and Viet Nam because these countries are at the forefront in promoting investment infrastructure.