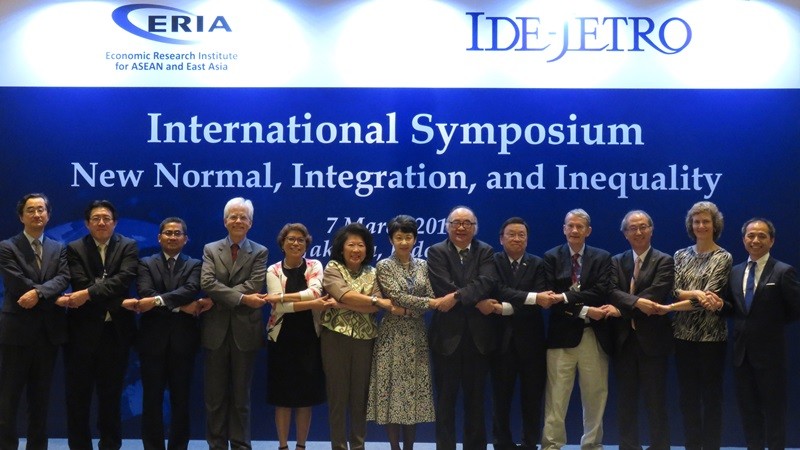 Jakarta, Indonesia - 7 March 2017: The Economic Research Institute for ASEAN and East Asia (ERIA) and the Institute of Developing Economies - Japan External Trade Organization (IDE-JETRO) held a one day workshop followed by a half day public symposium which discussed research on integration and inequality across ASEAN and East Asia.

President Donald Trump's 'America First' policy, with its withdrawal of the US from the TPP, desire for renegotiating NAFTA, and call for imposing border taxes, signals a decisive shift away from the policies of his predecessor. Taken together with the UK's intention to leave the European Union, old certainties based around open and liberal regional trading regimes no longer seem to have resonance, causing uncertainty about what the 'new normal' is.

Given this global context, leaders of East Asian and ASEAN nations must prioritise completing the Regional Comprehensive Economic Partnership (RCEP) negotiation by the end of 2017. It is very important for the region in order to maintain growth momentum.

Prof Mari Elka Pangestu from the University of Indonesia, who served as Indonesia's Minister of Trade in 2004 to 2011 and Minister of Tourism and Creative Economy in 2011 to 2014, delivered the keynote speech in the first session of the symposium in which she stated that the share of East Asia intraregional trade increased from 45 percent in 1990 to 55 percent in 2014 thanks to a conducive and open world economy. Within that period, economic liberalisation happened; however, the world has changed dramatically in the last several years forming a 'new normal'. Prof Pangestu said that Asia could not respond by doing business as usual, especially at a time when world trade growth is slow and at, or lower than, gross domestic product (GDP) growth.

'Asian integration can be the new tailwind of the global economy,' she said, adding that 'RCEP is the only game in town.'

She stated that the drop in global trade was caused by policy uncertainty. Asia is the region that managed to grow at the fastest pace in the world, and ASEAN centrality is key to moving RCEP forward. 'RCEP is the last resort for ASEAN to gain centrality,' stated Dr Wisarn Pupphavesa, Senior Advisor for International Economic Relations at the Thailand Development Research Institute.

Dr Theresa M Greaney, an Associate Professor from the University of Hawai'i, stated in her keynote speech for the second session discussing regional integration and inequality that it was inaccurate to place the blame for inequality on trade.

'Trade economists are very united in the opinion that trade is not the sole cause for inequality. You grow a bigger pie by being open to trade. The question is how to distribute the pie. We need research and policy attention on resource distribution.'

The Institute of Developing Economies (IDE) aims to make intellectual contributions to the world as a leading centre of social-science research on developing regions. We accumulate locally-grounded knowledge on these areas, clarify the conditions and issues they are facing, and disseminate a better understanding of these areas both domestically and abroad. These activities provide an intellectual foundation to facilitate cooperation between Japan and the international community for addressing development issues.

Session 2: Trade, Growth and Economic Inequality in the Asia-Pacific Region