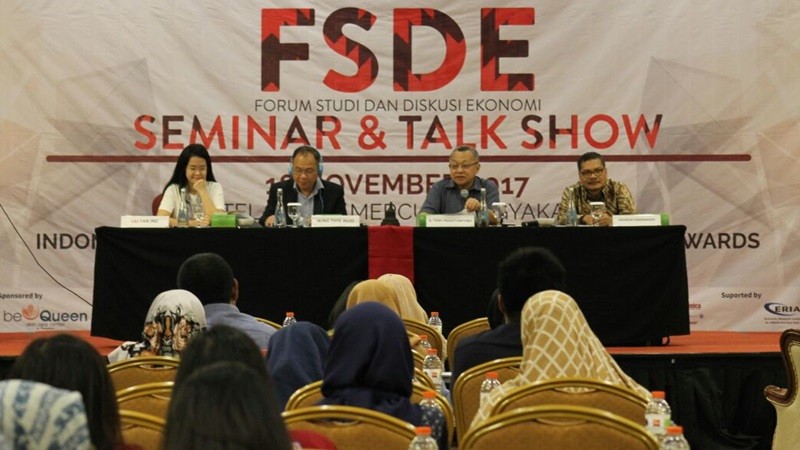 Representatives from the government, private industry, and academia were invited both to provide insights on the new world trade environment and to stimulate relevant discussions on Indonesian trade and industrial policies. Iskandar Simorangkir, Deputy Minister for Macroeconomic and Financial Coordination - ‎ Coordinating Ministry for Economic Affairs; Professor Wing Thye Woo, Professor of Economics at UC Davis; and Dr. Lili Yan Ing, Senior Economist at ERIA delivered keynote speeches in the first section of the event which was moderated by Tony Prasetiantono, Head of Economics and Public Policy Study Centre UGM. All panels agreed that the world is facing deglobalization and praised the boldness of Jokowi's Administration in 'getting Indonesia's infrastructure right' to boost the nation's economy.

The second session of the event was a talk show featuring speakers Hendri Saparini, Head Commisioner of PT Telkom Indonesia Tbk, and Elvyn G Masassya, Head Director of PT Pelabuhan Indonesia II, with moderator Poppy Ismalina, Lecturer at Faculty of Economics and Business, UGM. The event was also intended to promote two recent ERIA-Routledge publications The Indonesian Economy: Industrial and Trade Policy and Production Networks in Southeast Asia; therefore, the discussions involved some of the main topics examined in the two books.

The book The Indonesian Economy: Industrial and Trade Policy has two key messages. The first one is that Indonesia should not limit itself to particular industries to grow - by providing tax incentives or subsidies, or allocating large amount of national spending to develop particular industries - at the cost of other industries and inefficiency of resource allocation. The second one is that Indonesia should improve the basic conditions for all industries to grow including infrastructure, quantity and quality of workers, access to finance, and adopt conducive trade and investment policies.

The book 'Production Networks in Southeast Asia' offers two significant insights. The first one is that trade is growing, production is sliced, and tasks are fragmented. As such, specialisation is no longer a country's comparative advantage; instead, it is firm-specific, product-specific, and worker-specific. The second one is that more openness to trade and investment may tend to pull down the ratio of domestic value added but level up the total amount of domestic value added.

The Economic Research Institute for ASEAN and East Asia (ERIA) is an international organisation based in Jakarta. Since its founding in 2008, ERIA, through its research, supports the regional economic integration process among ASEAN member countries. As the leading economic think tank in the region and the Sherpa institution for the East Asia and ASEAN Summit process, ERIA's research and policy recommendations have influenced the policymaking process in the region. ERIA's research projects are categorised under three pillars: deepening economic integration, narrowing development gaps, and sustainable development.