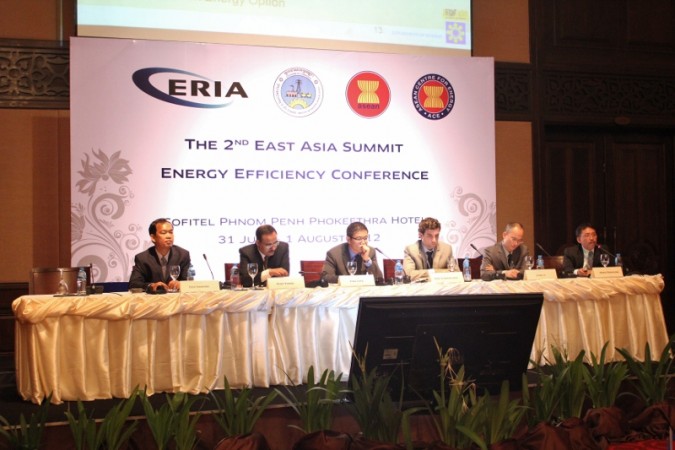 Phnom Penh, August 1, 2012 -- During the two days discussion of the 2nd East Asia Summit Energy Efficiency Conference in Phnom Penh, experts and policies makers of the participants raised issues and strategies for adapting the local and global context.

Cambodia is needing $ 1 billion over the years or at least 100 million annual investment to develop renewable energy projects for rural electricification in order to reduce its dependence on diesel consumption, said Mr. Toch Sovanna, Director of Department of Energy Technic, Ministry of Industry, Mines and Energy, Cambodia (MIME).

Thailand focus on fuel diversification policy through development of renewable energy, power import from neighboring country and coal fired generation to balance natural gas. Dr. Jiraporn Sirikum, Chief of Generation System Development Planning Department, EGAT, said that "Thailand will still depend on natural gas but share will be reduced from 67% in 2011 to about 58% in 2030 despite we delay our nuclear power project after Fukushima accident. We are waiting until Japan restart 100% of its nuclear power stations." For generation mix, Thai energy policy is to have power import of about 15% to 25%.

Thailand and Laos are following the Z scenario, according to a research of The University of Tokyo presented during the conference by Prof. Dr. Ichiro Sakata mentioning about three scenario XYZ- Poverty Reduction, New Industrial Creation, and GMS Integration.

"We had stakeholder meeting to identify core policy targets for the interest of the country of research to find various kind of technology contribute to resolve problem to pursue social political target". Mr. Shinichi Kihara said that "there is a gap between the rich and the poor since the amount of electricity consumption in New York is the same as the whole continent of Africa".

The government of Laos made the 1st announcement to ban the impact of second hand cars in October 2011. The 2nd announcement was made in February 2012 and it is affected from June 2012. Said by Mr. Bouathep Malaykham, Deputy Director General, Department of Energy Management, Ministry of Energy and Mines, Laos.

Sharing advice in the conference, German expert Arne Schweinfurth, advisor for Renewable energy Support Program for ASEAN, recommend to promote villagers and operators to learn among ASEAN regions whose knowledge and experience are rich and more relevant rather than in Germany or U.S.

The 2nd East Asia Summit Energy Efficiency Conference begins on July 31-August 1, 2012, hosted by the Ministry of Industry, Mines and Energy, Cambodia (MIME) in cooperation with the Economic Research Institute for ASEAN and East Asia (ERIA) and the ASEAN Centre for Energy (ACE) with special support of International Renewable Energy Agency (IRENA).