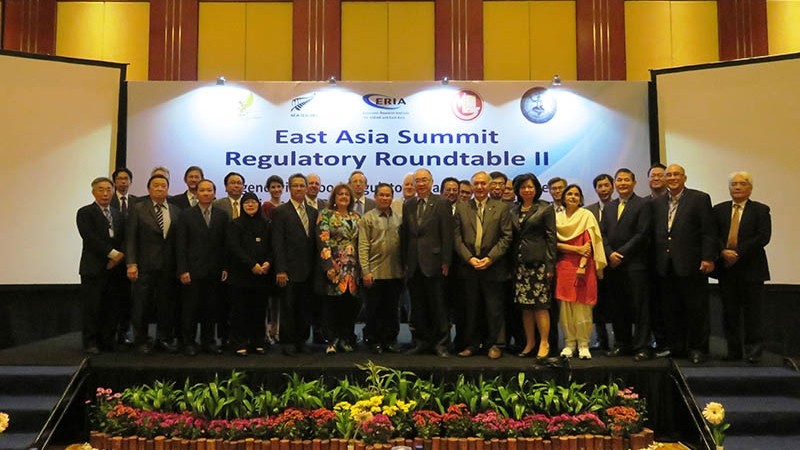 The East Asia Summit Regulatory Roundtable II, held in Jakarta, Indonesia, on 29 September, explored ways to engender good regulatory practices for a more dynamic business and investment environment in the region. The roundtable aimed to answer how regulatory reform can strengthen ASEAN connectivity.

Establishing good regulatory practices is a process that can take many years and requires strong political leadership. Regulatory reform is also an ongoing process that needs constant fine-tuning to better serve the stakeholders.

The roundtable highlighted the efforts and outlook for improved regulatory management practices in Indonesia, the Philippines, Singapore, Thailand, Viet Nam, as well as Australia, Japan, Republic of Korea, and New Zealand.

Korea's radical regulatory reform facilitated the country's transformation from government-led development to market-driven economy, from interventionist regulations to business-friendly ones, and from administrative discretion to rule-based regulations offering transparency and accountability.

The Organisation for Economic Co-operation and Development (OECD) also offered its valuable insight on good regulatory practices, stating that to 'regulate well' requires the 'right rules and the right people for the right results'.

Nine country studies were presented on the evolution and status of regulatory management systems. The country studies are part of the study on 'Regulatory Management Systems in East Asia: Deconstruction, Insights and Fostering ASEAN's Quiet Revolution' by the Economic Research Institute for ASEAN and East Asia (ERIA) and the New Zealand Institute Economic Research (NZIER).

The roundtable included a number of distinguished speakers who shared their knowledge and outlook for regulatory reform.

In his keynote speech, H.E. Dr. Rizal Affandi Lukman, Indonesia's Deputy Minister of International Economic and Financial Cooperation,said that 'developing good practices and regulatory coherence both at the border and within the individual countries is essential to generate significant growth that is also inclusive'.He added that 'investment in infrastructure for connectivity should be matched with investment in regulatory capacities to make seamless connectivity a reality'.

H.E. Rahmat Pramono, Indonesia's Permanent Representative to ASEAN, said that the hope is that the ASEAN Secretariat will serve as a centre of analysis and evaluation of current regulations in ASEAN; measure the impacts of these regulations; and then give policy recommendations to address the gaps. 'We'll then have a centralised body to ensure policy coordination in ASEAN,' he added.

Trevor Matheson, New Zealand Ambassador to Indonesia, said domestic regulations should be coherent both domestically and with norms around trade and investment liberalisation. The regulations should support rather than hinder ASEAN connectivity and regional economic integration.

Professor Hidetoshi Nishimura, President of ERIA, said the 'roundtable encouraged all participants to work towards the realisation of an integrated ASEAN with adequate regulatory coherence both at and within the border'.

More than 150 people from government, academia, and the private sector, attended the roundtable, which was a follow-up to the inaugural East Asia Summit Regulatory Roundtable held in Bangkok, Thailand, in 2013.

The discussions at the roundtable will provide the basis for the 'Report on the EAS Regulatory Roundtable II' to be delivered to the EAS Senior Officials' Meeting and to the ASEAN Connectivity Coordinating Committee.

This roundtable was organised by the governments of Indonesia, Malaysia, and New Zealand, as well as ERIA and the Center for Strategic and International Studies (CSIS).