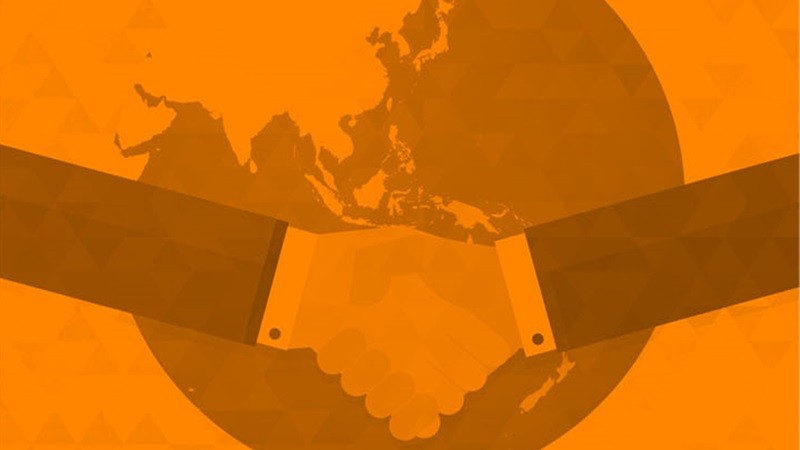 The Economic Research Institute for ASEAN and East Asia (ERIA), in collaboration with the Philippine Government, has embarked on the [email protected] Project as part of the commemorative events to celebrate ASEAN's 50th anniversary in 2017.

In honour of ASEAN Day 2017, ERIA is releasing this fourth volume of the five-volume commemorative publication, entitled Volume 4: Building ASEAN Community: Political-Security and Socio-cultural Reflections at the ASEAN Ministerial Meetings in Manila.
During this period of heightened global tensions, this volume presents important essays on ASEAN Political-Security Community (Part A) and ASEAN Socio-Cultural Community (Part B) written by a distinguished group of academics and officials.

In the integrative chapter of Part A, Professor Aileen Baviera from the Asian Center at the University of the Philippines, describes how eminent analysts of ASEAN and Southeast Asia share their assessments and recommendations for ASEAN's way forward, focusing on the project of building an ASEAN Political-Security Community. The essays are written to help make sense of the significance of ASEAN in the current world order and to draw insights into what needs to be done so that ASEAN can truly fulfil its potentials.

In the Bangkok Declaration that proclaimed the establishment of ASEAN, the objective was cooperation in economic and social fields. However, according to Professor Susumu Yamakage from Aoyama Gakuin University, 'the real reason was for a more secure Southeast Asia to enable the countries of the region to concentrate more on their own nation-building and national integration.' That reason became clear after the Treaty of Amity and Cooperation (TAC), which Professor Yamakage considers to be the foundational basis of ASEAN, was concluded in 1976.

The TAC also played a role in the establishment of East Asia Summit (EAS), since ASEAN stipulated the accession to the TAC as one of the conditions to become a member of EAS. Professor Yamakage states that the TAC 'helps member states obtain the commitment of countries outside the region to a friendly and cooperative relationship. It will play a role in regional peace and stability in the years to come.' Moreover, 'the TAC has expanded the "hub and spoke" relations between ASEAN and its external partners', which prompted Professor Yamakage to argue that now is the time for ASEAN 'to take initiatives towards the multilateralisation of the TAC' as it will 'remain important beyond the 50th anniversary of ASEAN not only for the AMS but also for countries outside Southeast Asia.'

In the same vein, Simon Tay, Chairman of the Singapore Institute for International Affairs and Associate Professor in the National University of Singapore, believes that ASEAN offered its leadership not only internally but also externally to the Asia-Pacific region even though it is not a major power in security, politics, and economics. However, he notes that the global and regional order is changing, and its tumultuous nature may change the ASEAN leadership.

'The role of ASEAN in providing leadership to the region is one based more on the perception on need and some utility -- especially by the major powers -- rather than on the inherent strengths of the group. That role has endured thus far, but can, if circumstances shift sharply and strongly, be diminished,' said Professor Tay.

He goes on to discuss the future of ASEAN leadership, noting that while he shares some concerns regarding 'the ASEAN Way', he also finds his views 'differ in terms of what policies would be required as the group moves ahead.' Even though some commentators believed that the ASEAN Secretariat should be stronger, larger, and more empowered in a way that resembles the European Union and its Commission, Professor Tay believes that 'while ASEAN can and should play its part, the key actors will be at the national level.' Furthermore, he advocates that 'shifts in governance and policies need to be undertaken in each ASEAN country to position them to better participate and lead at the regional level.'

While Professor Tay states that Beijing's way of lobbying in regards to the disputes of the South China Sea have made ASEAN unable to arrive at a consensus statement, Professor Zhang Yunling and Professor Wang Yuzhu from the Chinese Academy of Social Sciences argue that 'as a rising power, China will naturally expand its interests and exert its influence, which can lead to its neighbours questioning China's proclaimed intention of choosing a path of peaceful development.' They write that 'China is committed to a peaceful development as a key part of its grand strategy' because 'China has benefited from peaceful engagement and participation in the international system.'

In its relations with the Southeast Asian countries, China pursues a two-track strategy: it cultivates bilateral relationships with each member states and a collective relationship with ASEAN as a whole. The two authors believe that ASEAN plays an important role in China's 'grand strategy', recognising ASEAN as 'a special and reliable strategic partner' in trade and investment, community building in East Asia, and the peaceful resolution of the South China Sea disputes.

Professor Zhang and Professor Wang state that 'the China-ASEAN relationship has entered a new stage and is facing new challenges', namely building trust, advancing economic cooperation, managing disputes, and championing globalisation. In their view, China's Belt and Road Initiative provides 'a new opportunity for China and ASEAN to deepen their economic cooperation', which will result in the development of 'a new dynamic economic area'.

Essays in Part B: Socio-Cultural Reflections

Part B focuses on the growing importance of the ASEAN Socio-Cultural Community (ASCC) in the post-2015 era. The ten essays present 'recurring, persistent, and emerging themes that helped define the ASCC and frame the key challenges for the ASCC in the next 10 years' writes Larry Maramis, Senior Consultant on ASEAN Affairs of the United Nations Economic and Social Commission for Asia and the Pacific. They paint a picture of an ASEAN Community that is adaptive, eclectic, with an ability to mould its persona, and malleable to the political, economic, and social demands of the day.

In his chapter titled The Critical Importance of the Socio-Cultural Community for the Future of ASEAN, Abhisit Vejjajiva, Prime Minister, Kingdom of Thailand (2008-2011) argues 'If the ASEAN Community - and even the ASEAN Economic Community (AEC) itself - is to be realized, ASEAN needs to work on social integration where the peoples of ASEAN are brought closer socially and culturally. The ASEAN Socio-Cultural Community, one of the three pillars of the ASEAN Community, should thus be a key driving force to achieve this.'

Lamenting that ASEAN is widely perceived to be synonymous with the AEC, he points out that intra-ASEAN trade actually remains quite low while at the same time pressures from globalization are being felt widely across the whole region. 'For ASEAN to remain relevant, to be a real global player with a significant voice and to indeed be a true community, it has to work for further advancements in its regional cooperation and integration arrangements and demonstrate its readiness to tackle challenges related to globalization and to problems requiring a regional solution.'

To truly advance the development of an ASEAN community, the people must be 'brought together by a sense of shared destiny of peace and prosperity based on common ASEAN values and an ASEAN identity.' 'For ASEAN, it is therefore clear that if it were to aspire for closer integration, the development of a widely accepted ASEAN identity (part of the ASCC vision), values, and principles is the most critical factor. Of equal importance is to engage the peoples of ASEAN, not just political leaders and bureaucrats...'

How should policy-makers approach the project of strengthening the Social Cultural Community including building a deeper sense of ASEAN identity? ASEAN youth is a good place to start. In their fascinating paper, 'Leveraging on Business, Art/Culture, Technology, and Networking in Building ASEAN's Young Generation in an Integrated ASEAN', Karndee Leopairote, Marisara Promyotin, and Spencer Giorgio investigate how the young generation's mindset towards integration is shaped by business, art/culture, networking, and technology. They find in the young generation of ASEAN a belief in the power of networking in implementing integration, and that religion, ethnicity, educational backgrounds, and languages, for example, are viewed as unique assets. 'Diversity of the region is not a problem; it is an opportunity to learn from one another and grow', they argue.

What can further inform and inspire the new generation of ASEAN citizens and further develop the ongoing formulation of the ASEAN Identity, brand, and common community language? Very few come as close to the core issues in examining Southeast Asian identity as Farish Noor in his essay 'Where Do We Begin?'. He sounds a cautionary note about ASEAN's current talk of shared cultural identity and of ASEAN centrality, about learning the wrong pre-state/ post-colonial historical lessons, oversimplification, and applying conventional so-called modernist analysis in returning to our complex past for symbols and emblems that would rationalise the concept of Asia and the place of South East Asia. Farish's essay helps to achieve a better perspective in examining the ASCC's championing of the ASEAN Identity and the challenges among political, economic, and social scientists. His essay argues for recognising our blind spots, our multiple realities, and calls for the promotion of new tools, vocabulary, and lexicon in the revival of a Southeast Asian historical root in defining the ASEAN identity.