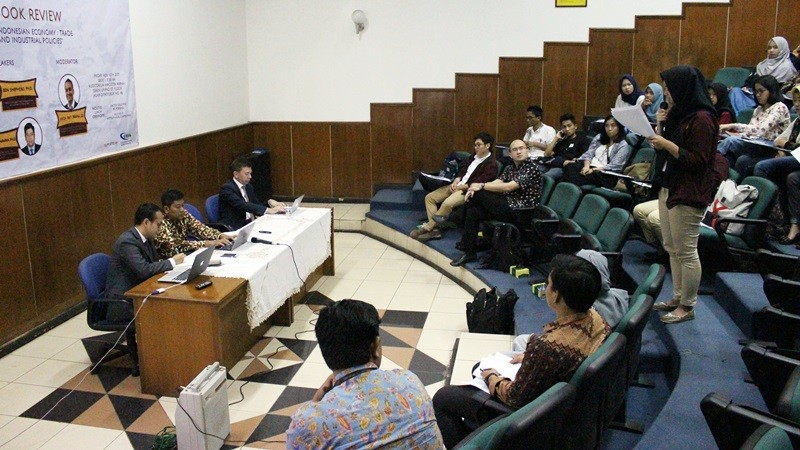 BANDUNG, INDONESIA - 10 November 2017: The Economic Research Institute for ASEAN and East Asia (ERIA), together with the Faculty of Economics and Business, Padjajaran University, held a dissemination event for the newly published ERIA-Routledge book The Indonesian Economy: Industrial and Trade Policy at the Padjajaran University Dipatiukur Campus.
This important new book addresses the theme of how Indonesia should shape its trade and industrial policies in the new world trade environment.

Two contributors of the book talked about their work and answered questions from a room full of enthusiastic students. Dr Ben Shepherd, Principal at Developing Trade Consultants, explained the reasons behind Indonesia's lack of performance in relation to production networks. He pointed to Indonesia's restrictive trade policies regarding services, a much stronger domestic market focus than any other ASEAN countries, and distortions to competition as three leading causes.

Dr Shepherd also emphasised that in order for Indonesia to regain its position in the region's global value chain. 'Indonesia should start lifting horizontal restrictions (as opposed to lifting restrictions of specific sectors) in services trade as we don't want government to alter incentives across sectors. Ideally, we want to keep incentives relatively flat across sectors and let the market allocate resources to the most efficient users,' he said.

Dr Muhammad Purnagunawan, a Senior Lecturer and Researcher in the Department of Economics, Padjadjaran University, talked about issues and challenges in the labour market and firm competitiveness in Indonesia. With the size of 124 million people in 2014, Indonesia's labour force was the 4th biggest in the world. The growth of employment in manufacturing however remains low, however despite performing below expectation, the manufacturing sector contributes higher productivity than the agriculture and services sectors.

'To increase the growth of employment in manufacturing sector, Indonesia needs to improve its human resources by creating skills development system that would allow workers to continually acquire new skills, both general and firm-specific skills, through non-formal or on-the-job training,' said Dr Purnagunawan.

In addition to the topics discussed during the event, the book also talks about the impact of local content requirements on Indonesia's manufacturing, FDI and value-added in Indonesia, and innovation in the manufacturing and services sectors. The main objective of the book is to convey two key messages. First: Indonesia should not limit itself to promotion of specific industries - by providing tax incentives or subsidies, or allocating large amount of national spending to develop particular industries - at the cost of other industries and inefficiency of resource allocation. Second: Indonesia should improve the basic conditions for growth of all industries including infrastructure, quantity and quality of workers, access to finance, while at the same time adopting conducive trade and investment policies.

For trade practitioners, the book also introduces an evaluation of new trade instruments such as non-tariff measures (SPS, TBT, export measures and beyond border measures), and looks at industrial policies from a broader perspective such as investment, accessing inputs, labour, services, research and innovation policies.

The Economic Research Institute for ASEAN and East Asia (ERIA) is an international organisation based in Jakarta. Since its founding in 2008, ERIA, through its research, supports the regional economic integration process among ASEAN member countries. As the leading economic think tank in the region and the Sherpa institution for the East Asia and ASEAN Summit process, ERIA's research and policy recommendations have influenced the policymaking process in the region. ERIA's research projects are categorised under three pillars: deepening economic integration, narrowing development gaps, and sustainable development.