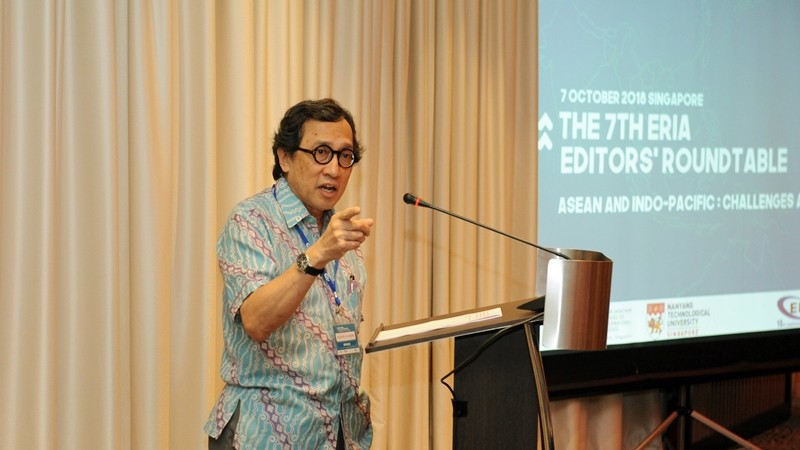 Jakarta, 9 October 2018: On 6-7 October 2018, ERIA hosted the seventh edition of its ERIA Editors Roundtable (ERT) held in Singapore in partnership with Nanyang Technological University’s S. Rajaratnam School of International Studies. Taking on the theme of “ASEAN and Indo-Pacific: Challenges Ahead,” the event brought together editors from prominent media companies, policymakers, and academics from across ASEAN and East Asia.

With the aim of providing a platform to discuss recent issues facing ASEAN leaders, the event offered four sessions: Economic and political/security implications of ASEAN and Indo-Pacific, updates on the ASEAN Economic Community, and an interactive dialogue session on “fake news.”

One of the event highlights was the Opening Remarks by Mr Bilahari Kausikan, the Chairman of the Middle East Institute, National University of Singapore and former Permanent Secretary at the Ministry of Foreign Affairs for Singapore. In describing recent global politics - namely the China-US row, Mr Kausikan stated that “We are now in a period of transition to a more historically normal situation of a divided global and regional order and great power competition.” The full text of the speech can be found here.

The dynamic changes of global politics calls for East Asia, particularly ASEAN, to act in order to navigate through future challenges in that “Hedging against the long-term uncertainties and taking advantage of whatever opportunities may exist, requires ASEAN to move boldly on the second phase of economic integration which aims at creating a common market and common production platform in Southeast Asia.”

ERT is an annual event hosted by ERIA in the country of the current ASEAN Chairmanship. This year’s edition was attended by 46 participants from each of the ASEAN member countries, Japan, Australia and Korea.