ASEAN Must Contribute to Common Good 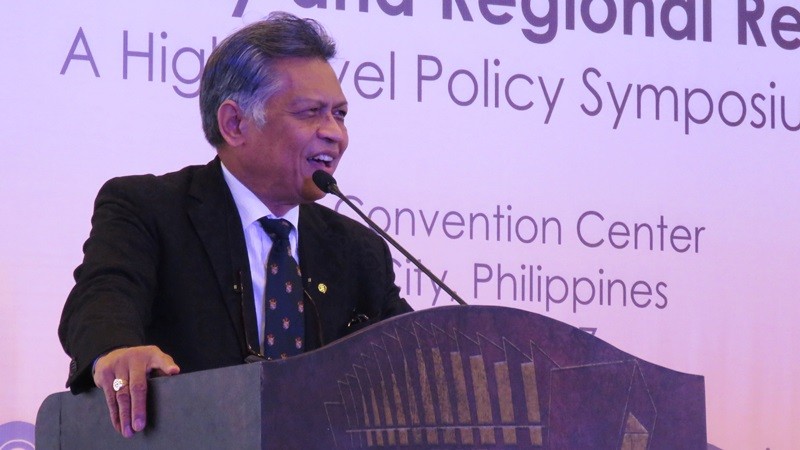 Iloilo City--19 June: A High Level Policy Symposium on ASEAN took place on Sunday with well over 200 participants taking part in policy debates on the future of ASEAN over the next 50 years.

Organized by the Economic Research Institute for ASEAN and East Asia (ERIA), the ASEAN Research Institute for Strategic Studies and Enterprise (ARISE), and the University of the Philippines (UP), it was a rare opportunity at the Iloilo Convention Convention to have diplomats, policy makers, thinkers and game changers as well as local business and the student community from ASEAN and dialogue partners' countries to exchange views and map out strategies on political and security cooperation, one of the three pillars including economic and social and culture that make up ASEAN.

In his open speech, Prof Hidetoshi Nishimura, President of ERIA, stressed that the strength of ASEAN political-security cooperation would depend on ASEAN centrality, which the grouping has been maintaining with vigor.

He said that the expansion of ASEAN membership from six to ten members as well as the East Asia Summit to include the US and Russia indicates the farsightedness of ASEAN in engaging international players.

Prof Nishimura pointed out that ASEAN wants to build cooperative peace that is pivotal for development in the region. He also said that the symposium is part of ERIA's year-long collaboration with the Philippine government, which is serving as the current ASEAN chair, to assimilate information about ASEAN and its achievements in the past five decades.

In his keynote speech, Dr Surin Pitsuwan, former Secretary General of ASEAN, reiterated that the only way ASEAN will survive in the next half century is to be 'more ASEAN.' He urged all members to cooperate more and expand intra-ASEAN trade markets.

'We have to do more of our own integration and globalization. It is the only way to go forward in the next half century,' he said adding that the future scenario is still uncertain.

But one trend is clear, he stressed, ASEAN has to contribute to the common goods within the global community. 'ASEAN has to transform this planet for all people,' he said. In conclusion, he added 'the ASEAN way remains a great practice that allow the members to pursue their own interests that would bring peace and prosperity to the region.'

The symposium held one plenary session discussing the past and outlook of ASEAN political and security coloration. Speakers on this session included Prof Juergen Haacks of the London School of Economics, Prof Aileen Baviera, University of Philippines, and Ambassador Rosario Manalo, Dean of the HZB School of International Relations and Diplomacy at the Philippine Women's University.