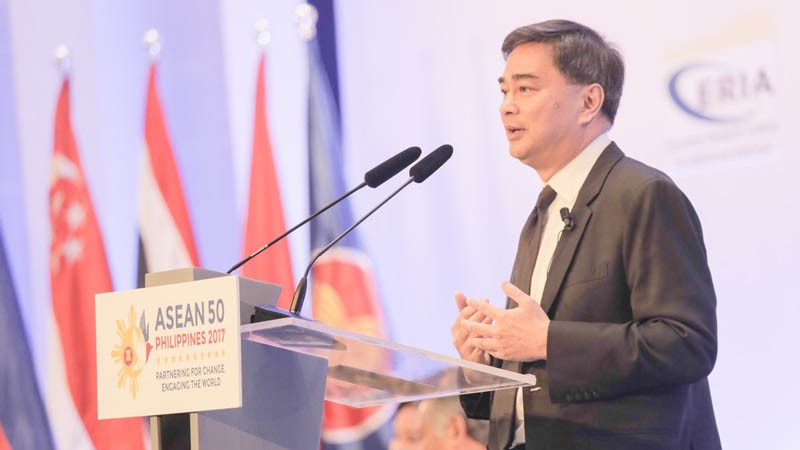 The Association of Southeast Asian Nations (ASEAN) can look to Europe's Brexit experience to ensure that something similar does not happen in the regional bloc. ASEAN can accomplish this by fostering a sense of belonging among ASEAN peoples despite the different realities that the approximately 625 million citizens of ASEAN's 10 member states face every day.

This was the observation of former Thai Prime Minister Abhisit Vejjajjiva, who was among the eminent leaders who spoke at the High Level Forum on ASEAN @50organised by the Department of Foreign Affairs (DFA), the Economic Research Institute for ASEAN and East Asia (ERIA), and the Foreign Service Institute (FSI) of the Philippine Government with the support of Japan-ASEAN Integration Fund (JAIF) and ASEAN Foundation (AF).

'The lesson we take from that is, for a sustained integration arrangement, you have to create a sense of belonging,' Abhisit addressed the forum, which ERIA organised along with Philippine partners as part of commemorative activities for ASEAN's 50th founding anniversary.

Cultivating a sense of unity is easier said than done considering the disparity in the level of economic development, culture, and history of ASEAN member states. These are actually the same factors that make economic integration difficult even though it has been at the focus of ASEAN community-building these past years.

'All these need changes in the domestic law, and so should be high on the domestic political agenda (but) won't happen until the people of ASEAN feel that these are the priorities,' Abhisit addressed the audience, which was comprised of members of the diplomatic community, the academe, and civil society.This essential integration can be accomplished more easily, however, if ASEAN states and its people feel a commonality.

This commonality can involve 'little things' like a common format in vehicles' plate numbers or the same emergency telephone numbers for first responders. Admittedly, a complication in a unified system like that could arise since not all ASEAN countries use and understand the English alphabet but these are difficulties that are not insurmountable.

Abhisit underscored the need to 'make ASEAN produce benefits that are tangible and people centered.' That means projects that the regular man on the street or a farmer in remote regions will recognise as an ASEAN project and get the idea that ASEAN is working and existing for their benefit.

'These are the kind of little things that might not add up to much numerically but will be significant in the minds of the people,' Abhisit explained.

Another way to familiarise people with ASEAN is to increase their direct involvement in the organisation's existing or ongoing activities. For instance, during Thailand's chairmanship of ASEAN under Abhisit, he invited civil society, youth groups, as well as members of the different parliaments for a direct interaction with the leaders.

In other words, ASEAN has to 'look for an ASEAN identity' and allow its citizens to own that identity. 'Soon, people won't accept ASEAN being run by a group of politicians and bureaucrats' the same way the British rejected how Brussels had been dictating the path the European Union has been taking.

Abhisit said this decision to embrace a more interactive role for civil society does not necessarily mean ASEAN will need to turn its back on practices - such as decision-making by consensus - that has allowed the grouping to overcome many stumbling blocks in the past.

'But key is to have to increase participation; not politicians or research institutes. It has to be an agenda for the people,' he said. 'They have to be part of the process, correct the democracy deficit in ASEAN.'