Ambassador Delia Albert: ASCC Should be the First Pillar of ASEAN 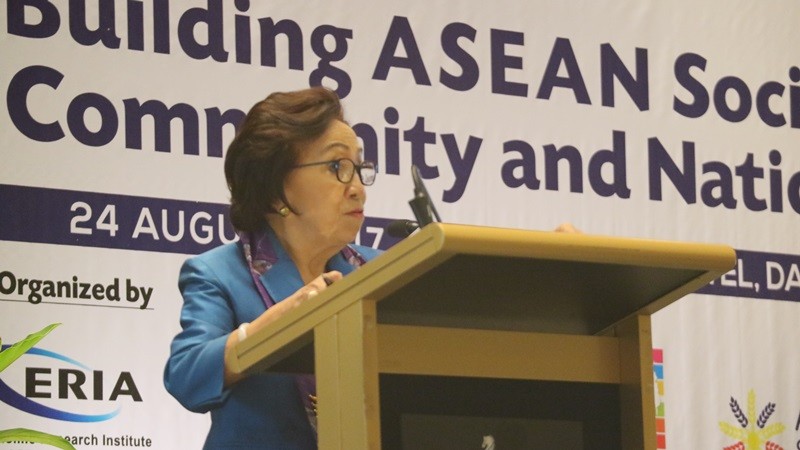 The ASEAN Socio-Cultural Community (ASCC) should be the first pillar of ASEAN to improve integration amongst member states, said Ambassador Delia Albert, the former Foreign Affairs Secretary of the Philippines and the Chairperson of ASEAN Society.

Ambassador Albert delivered her remarks in a Public Symposium on 'Building ASEAN Socio-Cultural Community and Nation Building' in Davao City, the Philippines, 24 August 2017.

The symposium was jointly organised by the Economic Research Institute for ASEAN and East Asia (ERIA), in collaboration with the Philippine Institute for Development Studies (PIDS), Mindanao Development Authority (MinDA), and ASEAN Society Philippines, with the support from the Philippines' Department of Foreign Affairs - Philippine Mission to ASEAN. It was part of the commemorative events for the 50th Anniversary of ASEAN and it was the second public symposium that ERIA held as part of the celebrations.

Ambassador Albert recounted her days as the Director General of the ASEAN National Secretariat in the Philippines Department of Foreign Affairs during the closing plenary session. She stated that in those days, they worked on functional cooperation and the idea that ASEAN Socio-Cultural Community should not be the third pillar.

In her keynote speech, the Former President of the Philippines H.E. Gloria Macapagal-Arroyo shared her experience as ASEAN Chair during her presidency, particularly about the ASEAN Socio-Cultural Community.'Actually, it should be the first pillar. And this was the confirmation in a book called Southeast Asia in Search of an ASEAN Community, written by the then Secretary General Rodolfo Severino. And he said, why did we start with political and economic? I said those were the needs of the early days of ASEAN, so it was imperative that security and political came first, and how do you achieve that, you go to economic cooperation. But I think it would have been easier for ASEAN to accept the integration process if there had been an earlier conscious effort to promote the socio-cultural pillar of ASEAN. But that being the case, we can't reverse history, so I think that my only statement today would be to start the 51st year of ASEAN talking about the third pillar becoming the first pillar, how about that?' she said.

'ASEAN has had a vital 50 years of existence. As a President of the Philippines from 2001 to 2010, I had the privilege of leading ASEAN for one period of those 50 years. And as our previous speakers have mentioned, during my time, in the October 2007 Summit in Bali, the Philippines had the honour of being the initiator of the ASEAN Socio-Cultural Community. In 2007, during my chairmanship of ASEAN, we followed through on our initiative with the summit theme of 'One Caring, Sharing Community',' said Former President Macapagal-Arroyo.

Mr Zaldy Patron, the Executive Director of the Office of ASEAN Affairs in the Philippines' Department of Foreign Affairs, shared the same sentiment with Prof Nishimura. 'The member states have shown fruitful existence through the ASEAN Way. ASEAN continues to be an outward looking organisation,' said Mr Patron.ERIA President, Prof Hidetoshi Nishimura, emphasised that the ASEAN Socio-Cultural Community (ASCC) provided the basis for the question 'what is ASEAN?'. He further mentioned that due to ASEAN's mindfulness of the diversities among its member states, ASEAN discovered the consensus-building approach that today is called the 'ASEAN way'. 'With great respect for each country, ASEAN has built peace and stability, and the nation, region, and community in five decades,' said Prof Nishimura.

The Mayor of Davao City, Hon. Sara Duterte-Carpio delivered her remarks on behalf of the Davao City government, welcoming the participants to the city.

The symposium had a panel discussion on 'Building ASEAN Socio-Cultural Community and Nation Building', followed by four concurrent sessions on two time slots. The sessions were: 'What does ASEAN mean to ASEAN people?', 'Networking, Innovation, Education, and Social Protection: Building ASEAN Socio-Cultural Community for the Future', 'Towards a More Resilient and Sustainable ASEAN', and 'Strengthening Brunei Darussalam-Indonesia-Malaysia-Philippines East ASEAN Growth Area (BIMP EAGA) and other Sub-regionals Towards a Stronger ASEAN Community'.

Related PublicationsERIA have planned four symposiums to commemorate the 50th anniversary of ASEAN. The first symposium, focused on the ASEAN Political-Security Community, was held in Iloilo in July. The third symposium, focused on the ASEAN Economic Community, will be held next month in Manila. The High Level Forum on [email protected], which is planned to be held in October in Manila, will conclude the series of commemorative events.