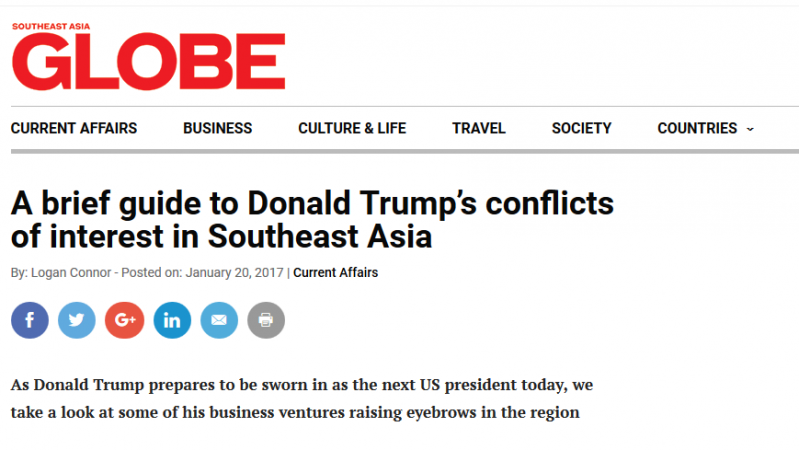 Thousands have begun converging on Washington DC to watch Donald Trump be inaugurated the 45th president of the United States later tonight. After his surprise victory in November – which has virtually split the US among political and ideological fault lines – those tasked with keeping presidential power in check have begun scouring his business ventures, finding conflicts of interest that span the globe. Trump’s hands, of course, have reached to Southeast Asia.

In Indonesia, Trump is a business partner of Hary Tanoesoedibjo, the billionaire chairman and chief executive of MNC Group, a Jakarta-based investment company that is currently building two luxury resorts in Indonesia that will be managed by the Trump Hotel Collection, a subsidiary of the Trump Organization. The MNC Group, according to Reuters, is investing between $500m and $1 billion in the two developments.

Trump has gained access to some of Indonesia’s top politicians through his partnership with Tanoesoedibjo. This includes Setya Novanto, the Indonesian House of Representatives speaker who was temporarily forced to step down from his post in 2015 over corruption allegations. Novanto was caught on tapelooking for a $4 billion payment from US mining company Freeport-McMoRan. In September 2015, after a meeting at Trump Tower, Trump brought Novanto before the cameras at a news conference and called him “a great man”, adding: “We will do great things for the United States.”

Trump’s Southeast Asia business ties extend to the Philippines, where the Trump Organization is involved in the construction of the $150m Manila Trump Tower. Building the tower is Jose E.B. Antonio, real estate magnate and managing director of the Century Properties Group, the company behind the project.

Complicating matters, Antonio was recently named special envoy to the US for trade, investment and economic affairs by Philippine President Rodrigo Duterte. Duterte, who perhaps rivals Trump in his outspokenness, has been heavily criticised by the administration of outgoing US president Barack Obama for waging a ‘war on drugs’ in the Philippines that has claimed roughly 6,000 lives. For Trump to have business ties to a member of Duterte’s government certainly creates ethical quandaries for the new US president.

While president-elect Trump has said the Trump Organization will not make any new deals abroad will he is president, he will still retain ownership of the company, while control will largely be placed in the hands of his two sons, Eric Trump and Donald Trump Jr.

Trump has publically praised himself for relinquishing control of his business, which he is not required by US law to do. “I could actually run my business and run government at the same time. I don’t like the way that looks,” Trump said last week. “But I would be able to do that if I wanted to.”

Masahito Ambashi, an economist at the Economic Research Institute for Asean and East Asia, said Trump’s regional business ventures should perhaps be the least of the international community’s worries. For Ambashi, Trump’s threat of launching a ‘trade war’ with China and imposing a 35% to 45% tariff on Chinese imports would be the most urgent threat for Southeast Asia.

“President Trump takes a hostile view of China, which he believes exports many manufacturing products to the US and deprives the US of local jobs,” Ambashi told Southeast Asia Globe.

He added: “A ‘trade war’ would certainly deteriorate these two economies [in the US and China], at worst causing recessions, which would have a negative impact on the Southeast Asian countries that depend on these two countries through international trade.”