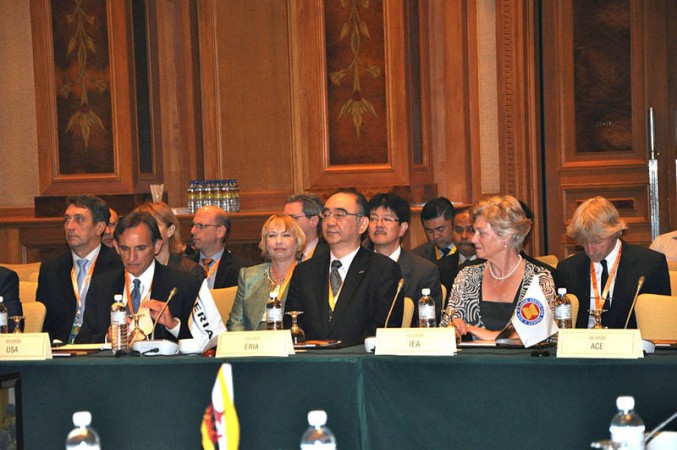 During the meeting, Mr. Nishimura reported about the 1st EAS Energy Efficiency Conference which was held on 24 August 2011 in Lao PDR and announced to establish Energy Unit in ERIA for strengthening cooperation in energy sector in the region.

ERIA is mentioned the following paragraph of Joint Ministerial Statement.

3. ????? The Ministers welcomed the implementation, on a voluntary basis, of the Energy Efficiency Roadmap Formulation Project in certain sectors of the interested countries and a fact-finding survey on sectoral energy-saving potentials that reflect the progress of action plans of the interested countries. The Ministers expressed appreciation to Lao PDR for hosting the Energy Efficiency Conference on 24 August 2011 and noted the Conference's policy recommendations in the fields of energy efficiency and conservation, renewable energy, energy security and others.

4. The Ministers acknowledged the advancements made by the Biofuels for Transport and Other Purposes Work Stream through the enhancement of the Biofuels Database in East Asia, implementation of the Researcher's Invitation Program, updating of the EAS-ERIA Biodiesel Fuel Trade Handbook, and upgrading of the sustainability assessment methodology for biomass utilization.?????

5. The Ministers reaffirmed the importance of establishing efficient, transparent, reliable, competitive and flexible energy markets as a means to provide affordable, secure and clean energy supplies for the region. ????? . The Ministers also noted the outcomes of ERIA's report on Energy Market Integration, which highlighted the need to further strengthen and expedite market integration efforts, given factors such as the Asian premium oil prices, the need for competitive energy markets and pricing, and the benefits of energy access for economic growth.

7. In addition to the ongoing cooperation under the existing three main Work Streams of the EAS Energy Cooperation Task Force, namely energy efficiency, market integration and biofuels for transport, the Ministers shared the view that going forward cooperation amongst EAS participating countries would benefit from an increased focus on the following areas: (i) charting outlook for energy demand and saving potential over the medium-to-long term; (ii) coordinating emergency response policies and measures; (iii) enhancing the use of existing fossil fuel resources in the region; (iv) improving electric power infrastructure, including nuclear power generation; and (v) developing clean energy and smart communities for efficient use of energy in the region. To initiate the cooperation, the Ministers agreed to commence research studies in these areas to be undertaken by ERIA with support from Japan.

9. The Ministers appreciated ERIA's support on the various work streams of EAS ECTF, and agreed to continue ongoing cooperation with ERIA for research studies on relevant issues. Inputs and policy recommendations from ERIA on the EAS energy cooperation, as stated in the paragraph 7, would be welcomed as material for continued policy discussions at the ministerial meetings from next year on.