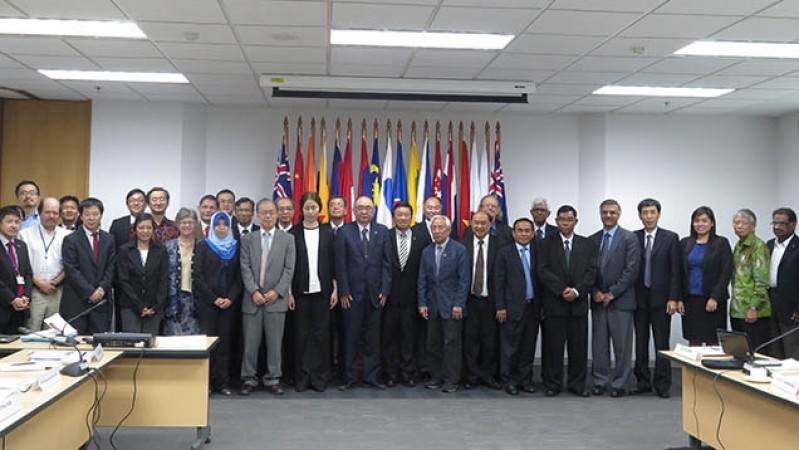 The second Research Institute Network (RIN) Meeting for 2014-2015 was held in Jakarta, Indonesia, on 24 January 2015, under the chairmanship of Dr. Hank Lim Giok-Hay from the Singapore Institute of International Affairs (SIIA). A representative from Mongolia, Dr. Enkhbaigali Byambasuren, Director of the National Development Institute of Mongolia, attended the meeting as an observer.

Session 1 was moderated by Prof. Yasushiro Yamada, President of BRC-JETRO. Prof. Fukunari Kimura, Chief Economist of ERIA, reported on ERIA research activities conducted in 2013 and 2014, and ERIA research programs for 2014 and 2015. Prof. Kimura expressed his appreciation for the support given by the RIN for the research conducted at ERIA, especially the large projects that required extensive groundwork in each country. Mr. Yasushi Iwata, General Manager of ERIA, highlighted recent ERIA activities since the last RIN meeting in July 2014. He also reported that ERIA is now ranked 28th among the Top International Economic Policy Think Tanks in the 2014 Global Go To Think Tank Index Report.

Session 2 was moderated by Dr. Hank Lim. Dr. Sothea Oum made a presentation on the SME Policy Index. He highlighted the key results of the index, explaining the methodology and its usefulness for ASEAN member countries. The members discussed AEC 2015 and Beyond as the content of the 5th RIN Statement. The statement's final version will be firmed up, taking into account the comments and modifications suggested during the meeting.

In his closing remarks, Prof. Hidetoshi Nishimura, Executive Director of ERIA, urged the members to continue to support ERIA in its research and related activities and he expressed his gratitude for the insightful comments and ideas from all participants.