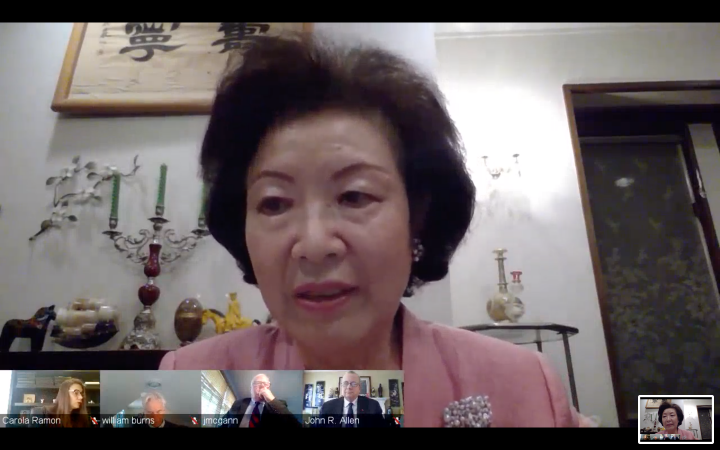 Virtual, 13 Nov 2020: With the theme ‘Think Tanks and Policy Advice in a Disrupted and Transformed World’, the 2020 Global Think Tank Summit was hosted online by the Think Tanks and Civil Societies Program (TTCSP) at the University of Pennsylvania.  Every year, prominent speakers from Think Tanks around the world participate in this forum to discuss the current state of affairs for think tanks, the challenges and opportunities, best practices, and innovative ideas for how best to provide relevant and timely research and policy recommendations to policy makers and leaders around the world.  This year the conversation focused on addressing the issues related to COVID-19.

ERIA was represented by Prof Akiko Yamanaka, Special Advisor to the President of ERIA, who spoke about the power of Preventative Diplomacy as a framework to build more resilient communities moving forward.

The forum was opened by Prof James McGann, Director of TTCSP, who provided background on the research conducted at a series of TTCSP Town Halls that were conducted earlier in the year and an overview of the event agenda.  About the program, he stated ‘We have created a platform where thank tanks and policy makers can come together around the world to look at what strategies and programs are working to address the challenges facing the world due to the pandemic.  We must realize that there will be no new normal ... The themes of all past summits have greater value today because of the necessity to rethink the business model for think tanks to survive.’

The discussions covered several cross-cutting themes including disruptive forces that will dramatically impact all lives.  The crisis has become the ‘great accelerator, transformer and terminator’ he said.  Many think tanks are experiencing deep crisis and some have already shut their doors.  Only those that implement operational changes like digital transformation will survive.

Chaired by Prof McGann, the first panel ‘The Invisible Black Swan: How COVID-19 Changed the World’ focused on the social, economic, and political impact of COVID-19 Crisis on each region of the world.

In the United States, COVID-19 has been politicized, said Mr John Allen, President of the Brookings Institution.  ‘This is a leadership issue, by extension a political issue ... The US has a special responsibility to provide medical logistical and leadership responsibility to address these issues.  It is a US imperative to embrace leadership in the world.’

In Africa, the death rate appears to have been lower than in other parts of the world.  The World Health Organization (WHO) has attributed this to a number of factors including younger population, lack of obesity, cross immunity, and outdoor living said Mr Vasu Goudun, Executive Director of the African Centre for the Constructive Resolution of Disputes (ACCORD).  However, the impact of measures taken have disproportionally impacted poor and people who work in the informal economy.  Other restrictions have resulted in a trust deficit.  But it has also brought people together on the political level with increased collaboration among African nations.

Brazil experienced economic contraction, but has started recovering.  ‘So we are expecting a bad year compared to normal, but better than other economies’ said Carlos Ivan Simonsen Leal, President of Fundação Getulio Vargas (FGV). Other impacts that are likely: globalization may recede; modern monetary theory will focus on printing money; digitalization is here to stay, inflation will come back as soon as economies heat up.  Unemployment is high in low and middle classes.  ‘We are preparing for this new world… The game has changed.’

Ms Karen Kornbluh, Senior Fellow and Director of the Digital Innovation and Democracy Initiative at the German Marshall Fund, discussed the new information ecosystem that undermines governance – a ‘misinformation sickness’ lead by vectors of anti-government sentiment.  She called for a ‘global effort to come together to change the infrastructure of misinformation.’

Central Europe did well during first wave, but is now among the most affected. Ms Alena Kudzko, Director, GLOBSEC explained that in the spring, Central Europe responded quickly, but then ‘we got to too confident.  You have to be constantly vigilant.’ There are reasons for pessimism, for example populism and dis-satisfaction with government are increasing.  But there are also reasons for optimism: think tanks are forced to become more agile and have gone digital and people want more multilateral coordination.

Paolo Magri, Director and Executive Vice President of the Italian Institute for International Political Studies (ISPI), describe three phases of the pandemic in Italy. First, the ‘winter shock’:  Italy was hit first and by June many people had died.  The economy was expected to decline so the EU behaved as a real union and produced a stimulus plan worth 1.5 billion euro.  Second, ‘midsummer night’s dream’ where infections went down and the economy rebounded.  Third, ‘autumn sad awakening’: the third wave looks worse than first wave.  Debt has sky-rocketed, there is less political consensus and less fiscal room.  We must look for opportunities to cooperate.  He reminded everyone that ISPI will be the chair of Italy T20 next year.

Picking up where Ms Kornbluh left off, Adam Posen, President of the Peterson Institute for International Economics posed the question: what is our ability to provide government deliverables?  ‘We cannot take for granted old conceptions of what is real and what is not…. Political vagaries are too fast moving.’  It is important to build a global system that is resilient to competition between the great powers. Mr Posen announced a new Petersen program that will call on other institutions to create policy papers to produce real deliverables.

From India, Mr Samir Saran, President of the Observer Research Foundation (ORF), spoke of India’s shrinking economy. Although the last two months the economy has shown signs of improvement, India has lost a year or a year and half of growth.  The people at the bottom are losing the most. ‘What we do going forward is more important than what we have already done ... How we re-organize the post-pandemic world is critical – build back better, green, and digital. Globalisation will be re-shaped and we need to rethink our economic systems around equity.’

China managed the pandemic well and the economy is relatively strong said Mr Huiyao (Henry) Wang, President of the Center for China and Globalization (CCG).  The digital economy played a huge role in carrying China through the crisis.  Mr Wang issued an invitation for the new Biden administration to collaborate with China set up a foundation with the rest of the world.

The final speaker on the panel, Ms Maha Yahya, Director of the Carnegie Middle East Center, spoke about the longer impact on the political economy. More adverse effect on vulnerable people including violence against women and children. People don’t trust the government.  But there are silver linings:  a growth in people to people support and the acceleration of e-commerce.

The second panel ‘Mandate for Ideas and Action in the Face of a Pandemic, Twindemic or Hydrademic’ featured a series of concrete proposals and programs from leading think tank scholars and executives from around the world to address the growing cost and complexity of the COVID19 Crisis. Mr Thomas Gomart, Director of the Institut français des relations internationales (IFRI) asked the participants to propose actions to address impacts of the pandemic, the ‘twindemic’ (medical and economic) and the ‘hydrademic’  (medical, economic, political, social).

Panelists called for increased global cooperation. Ms Carola Ramon Berjano, Director of Latin American Affairs Committee at Consejo Argentino para las Relaciones Internacionales’ noted that this is the first pandemic in such connected world, stating that therefore ‘only global cooperation can address it.  Multi-laterals are more important than ever.’  Mr Simon Tay, Chairman of the Singapore Institute of International Affairs’ (a member of ERIA’s Research Institute Network) hoped global leadership is possible.  But we must also emphasize regional cooperation.  In Southeast Asia there is the ASEAN Comprehensive Recovery Framework to help with recovery from the pandemic.  The region also needs to push for deeper integration, and he noted that the Regional Comprehensive Economic Partnership will bring the big economies together.

Another main issue was equality.  Winnie Stachelberg, Executive Vice President of External Affairs at the Center for American Progress noted that the corona shock has exposed inequalities.  It ‘reveals America’s degraded standing in the world and its inability to lead global efforts to address impacts. We must develop long-term plan for economic renewal.’ She called for an inclusive vision built on three pillars: (1) a national economic development plan to address inequality, (2) rebuilt social welfare system, and (3) a new model for international cooperation.

Mr Tay also suggested that the recovery must be linked to transformation in terms of sustainabily, resilience, and  green finance for  infrastructure.

Mr Amos Yadlin, Director of the Institute for National Security Studies in Isreal suggested that the recovery efforts be designed according three timeframes.  In the long-term, COVID-19 presents strategic opportunities.

During the QnA, themes that were addressed included the digital divide.

Panel III – ‘COVID19 Affect: Accelerator, Transformer or Terminator: What Think Tanks Must Do to Survive and Thrive in a World Disrupted’ – looked at how think tanks can be more agile, adaptive, and innovative to be effective in the post-COVID-19 world.

Mr Pablo Hurtado García, Executive Secretary of the Association of Research and Social Studies (ASIES) in Guatemala said that think tanks need to focus on opportunities, especially in terms of innovation, use of electronic platforms, collaboration, and better ways to communicate with decision-makers through partnerships and alliances. Ms Milena Lazarevic, Programme Director at the European Policy Centre, echoed his call for alliances, stating that ‘Partnership is the silver lining.  We must invest in long-term and structured partnerships.’

Mr Tetsushi Sonobe, Dean of Asian Development Bank Institute (ADBI), Japan stressed the fact that think tanks need to learn to be more agile by anticipating their clients’ needs in advance in order to be able to deliver evidence-based policy and high-quality knowledge products.

Ms Bridgett Wagner, Vice President for Policy Promotion at the Heritage Foundation emphasized the need for more knowledge and information sharing through new platforms, marketing, partners, and media relations, ‘but at the same time traditional relationships have become more important.’

Closing Panel, ‘How to Get Ahead of the Crisis and the Catastrophe Curve with Evidence, Expertise and Agility’ was chaired by Mr William Burns, President of Carnegie Endowment for International Peace who called for ‘More listening, less preaching.  More inclusive and bipartisan.’  Think tanks need to adapt and reinvent themselves.

Prof Yamanaka suggested that the theory of preventative diplomacy provides a useful framework for responding the challenges created by the pandemic. First, address public health including enhancing medical systems.  Second, focus on the economic impacts including supply chains and revitalizing businesses.  Prof Yamanaka described some of ERIA’s research on these matters.

Mr Allen, President of the Brookings Institution, as the final speaker on the panel, emphasized that ‘think tanks can talk when governments cannot.  We can have difficult conversations.’ The importance of trust has got to be reinforced – that is the critical role of think tanks.  We need to commit to renewing the belief in science and technology.

In closing the event, Mr McGann said ‘After every crisis, surge in creation of think tanks because there is a challenge to conventional wisdom.  We need the engagement of more health policy institutes. There is a strong demand for innovation and partnerships.  We need leaders who can provide real information and develop trust to avoid disinformation.