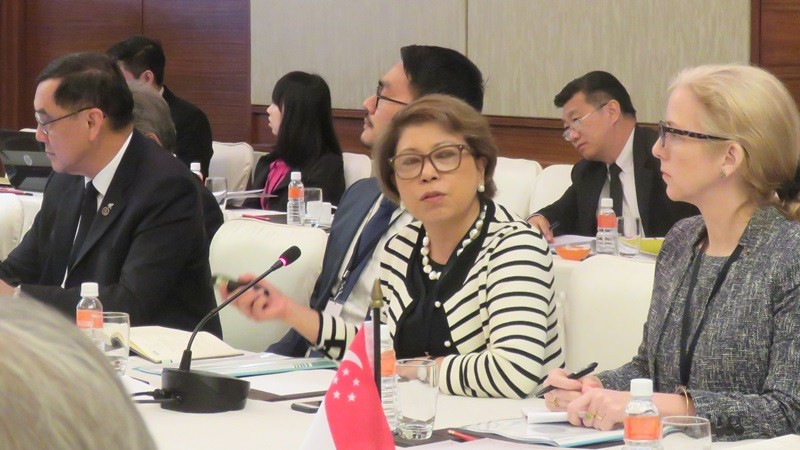 ASEAN-BAC's mandate is to provide private sector feedback to boost ASEAN integration effort. This year non-tariff measures (NTMs) and non-tariff barriers (NTBs) were one of the key topics. Tan Sri Dr Rebecca Sta Maria, Senior Policy Fellow at ERIA, presented on ERIA's work on the NTM Database. After summarizing the difference between NTMs and NTBs - 'unfettered measures become barriers' - she described the NTM database compiled by ERIA and UNCTAD. As a tool that promotes transparency, the database can be very useful to policy makers and the private sector alike. In fact ERIA is developing an 'NTM Database for Business' which will provide a less technical interface, thus making it more user friendly. ERIA is also expanding the database to include the six other countries of the EAS. Dr Rebecca also explained the importance of Ad-valorem Equivalents (AVE) for the NTMs to quantify NTM tariff equivalents. The Chair of the meeting, Mr Joey Concepcion, (ABAC Philippines Chair) thanks Dr Rebecca for her presentation and for ERIA's work on NTMs. Dr Rebecca stated that ERIA was ready to work together to further support ABAC's research.

On behalf of ERIA, Ambassador Elizabeth Buensuceso, the Permanent Representative of the Republic of the Philippines to ASEAN and Chair of CPR and ACCC, and Dr Rebecca briefed the ministers on 'Strategies to Deliver MPAC 2025'. One of the key messages was the need for closer coordination between AEC and MPAC; SEOM and ACCC as well as across pillars, especially at the working level. They also outlined the six strategic areas that need to be addressed: strong focus and targets; clear governance and ownership; clear and aligned plans; presence of core skills, incentives and finance; proactive stakeholder engagement; and robust performance management.

Prof Nishimura then thank the Ministers for providing the opportunity to present ERIA's work and noted that this Ministers Meeting was very special because the presentation on MPAC marked the first time AEM discussed the aligning AEC and MPAC 2025.

Prof Nishimura closed ERIA's briefing to the Ministers by introducing the [email protected] volumes and thanking the Ministers for their continued support.

ERIA was also very pleased to note the Ministers adopted the ASEAN Seamless Trade Facilitation Indicators (ASTFI) which are the product of a collaboration between ERIA, the ASEAN Trade Facilitation Joint Consultative Committee and the ASEAN Secretariat. The ASTFI will assist ASEAN member states to design policies and procedures that promote seamless import and export of goods.

14. The Ministers adopted the ASEAN Seamless Trade Facilitation Indicators (ASTFI), which were designed to measure and monitor the extent to which trade facilitation measures are implemented in the region through various ASEAN agreements, such as the ATIGA, The ASEAN Framework Agreement on Facilitation of Goods in Transit (AFAFGIT) and the various sectoral work plans relevant to trade facilitation.

15. The Ministers underscored the importance of intensifying efforts to facilitate the movement of goods and services within the AEC. The Ministers adopted the AEC 2025 Trade Facilitation Strategic Action Plan (ATF-SAP) and agreed to submit this to the AEC Council for endorsement. The Ministers expressed confidence that the ATF-SAP, together with the ASTFI, would be vital in implementing the earlier decision made by the AEM on reducing trade transaction cost in the region by 10% in 2020, and thereafter endorsed the target of doubling intra-ASEAN trade by 2025. The Ministers also welcomed renewed efforts of the ASEAN Trade Facilitation Joint Consultative Committee (ATF-JCC) in engaging key stakeholders to explore how to further facilitate trade with a view to realising a single market and production base in the region.

53. The Ministers welcomed ERIA's 5-volume [email protected] publication, which included: (i) ASEAN and Member States: Transformation and Integration (Volume 3); and (ii) ASEAN Economic Community into 2025 and Beyond (Volume 5). The Ministers expressed their appreciation to ERIA and commended them for their contribution not only to developing the ASTFI but also to on-going efforts to address NTMs. The Ministers agreed that ASEAN Member States should continue to work with ERIA in, among others, verifying and regularly updating the ASEAN NTMs in the ERIA-UNCTAD NTM database, examining possible policy options for addressing NTMs, and implementing the ASTFI, including the conduct of the baseline study in 2018.

Prof Hidetoshi Nishimura summarized the key findings of the ASEAN-Canada Free Trade Agreement Joint Feasibility Study that ERIA conducted with the Canadian counterpart which showed positive welfare gains for both Canada and ASEAN. If the next stage of the study is approved, ERIA suggested that the analysis cover individual ASEAN Member States in addition to the analysis of ASEAN as a whole. Prof Nishimura stated that ERIA is also ready to further its cooperation with AMs, the ASEAN Secretariat and Canada for continued study. In their Joint Media Statement, the Ministers agreed that based on the positive preliminary results, the research should be continued.

4. The Ministers endorsed the Terms of Reference for a Joint Feasibility Study Toward an ASEAN-Canada Free Trade Agreement (FTA). Ministers also welcomed the completion of the Preliminary Joint Feasibility Study for an ASEAN-Canada FTA, which was jointly conducted by the Economic Research Institute for ASEAN and East Asia (ERIA) on ASEAN's behalf and Global Affairs Canada. This preliminary study provides an overview of the ASEAN and Canadian economies; highlights key bilateral trends in terms of trade in goods, services and investment; examines each party's broader approach to FTA negotiations; and evaluates the potential benefits of an ASEAN-Canada FTA.

Prof Nishimura held a bilateral meeting with the Minister to present a follow up to ERIA's report 'Lao PDR at the Crossroads: Industrial Development Strategies 2016-2030.' After thanking the Minister for her continued support of ERIA and its activities, Prof Nishimura updated the Minister on 2017 activities related to the implementation of the report's strategies and asked the Minister for her guidance and suggestions to accelerate the follow-up work including the planned workshop ERIA will host in Vientiane in January 2018. The Minister thanked ERIA for its contributions and stated that agriculture is a priority area for the Lao government. The Minister asked ERIA to prepare a concept note for potential projects focussed on key priorities.

Prof Nishimura thanked the Ministers for the opportunity to present ERIA's recent research. He provided an over view of the five volume [email protected] commemorative publication ERIA undertook with the Philippine Government on the making, substance and future of ASEAN.

Dr Ponciano Intal Jr, ERIA Senior Economist, then briefed the Ministers on some of the insights from the [email protected] project including findings of a survey of over 2,300 respondents across ASEAN (see results here and see presentation here). On the whole, the survey results indicated that there is a strong aspiration for an ASEAN that is (1) integrated and connected; (2) resilient, equitable and sustainable; (3) characterised by good governance; and (4) with a significant global and regional presence. This and many of the other findings suggest that a successful AEC depends upon delivering benefits to all people.

H.E. Ramon Lopez, Secretary of Trade and Industry of the Philippines and Chair of the meeting thanked Dr Pons and stated that the study was very interesting and the findings very insightful. Several other Ministers acknowledged ERIA's contributions to EAS including the ASTFI, RCEP, BRI and MPAC, the Digital Economy and SME development.

Prof Nishimura then briefed the Ministers on regional and global economic developments. Noting the positive trends in the growth indicators for developed countries, he suggested that this creates an opportunity for East Asia to secure and augment the gains from trade and investment-led growth of the past years. He further stated that ASEAN integration is a necessary condition for East Asian economic integration. Since ASEAN has already achieved significant tariff reductions, ERIA's current and future work includes other related issues like NTMs, trade facilitation and connectivity.

Again the Chair and several Ministers thanked ERIA for its support of EAS.

9. The Ministers noted the importance of gaining insights and exchanging information and knowledge with the ERIA (Economic Research Institute for ASEAN and East Asia). The Ministers also welcomed the contribution of newly established ERIA's Policy Design Department and the report of the 10th ERIA Governing Board Meeting held on 9 June 2017 in Jakarta, Indonesia. The Ministers appreciated the updates on ERIA's on-going and future research activities in support of regional economic integration, and requested ERIA to continue its research activities toward further economic integration of ASEAN and East Asia. The Ministers appreciated the efforts of ERIA to publish the five volume book-set to commemorate the fifty years anniversary of ASEAN. (See the full Statement here).

In addition, ERIA was mentioned in the 20th AEM Plus Three Consultations Joint Media Statement 10 September