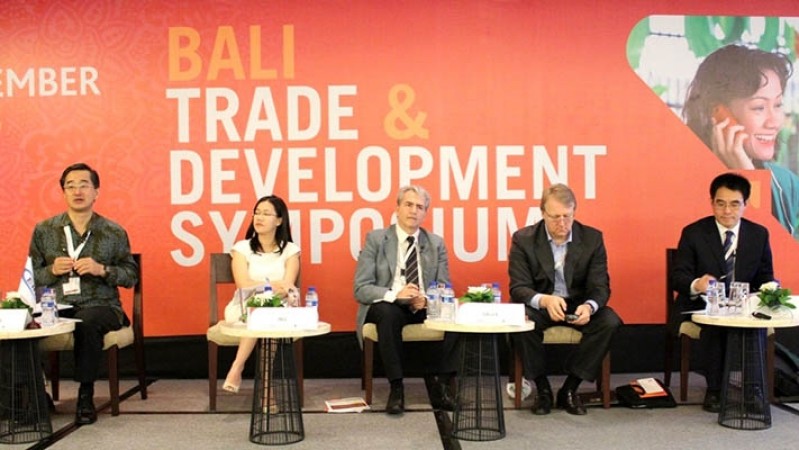 The Economic Research Institute for ASEAN and East Asia (ERIA) hosted a session "East Asian Economic Integration and the WTO" in the Bali Trade and Development Symposium organized by the International Center for Trade and Sustainable Development (ICTSD) and the Center for Strategic and International Studies (CSIS), Indonesia in the margin of the Ninth WTO Ministerial Conference (MC9).

The session was held at Bali International Convention Center, Westin Hotel on December 5, 2013.

"ASEAN integration is beyond conventional trade integration. ASEAN does not aim to be a 'customs union', but the ASEAN Economic Community is intended to act as a 'production base' which will have free movement of goods, services, skilled labor and capital. Focusing on development of production networks is necessary by improving agreements on customs and logistcis to reduce service link costs." She insisted the importance of the ASEAN economic integration as a role of production networks.

In his presentation, Prof. Pierre Sauve, Director of External Programmes and Academic Partnerships, World Trade Institute (WTI), University of Bern made recommendations on the current WTO system, "the advances ASEAN has recorded on air transport liberalization and MRAs in professional services suggest the superior benefits of regionalism in some sectors and the probable limits of WTO. Tourism, health care link to MRAs for dentists, doctors and nurses, e-ASEAN such as telecoms, IT and computer-related services, logistics, and air transport services are priority sectors."

"The new regionalism could be the source of a deep global agreement. Bilateral FTAs are yielding to regional FTAs due to strong economic incentives. Regionalism FTAs will create a strong incentive to move toward a global accord." Prof. Michael G. Plummer, ENI Professor of International Economics, SAIS, Johns Hopkins University pointed out that, judging from academic evidences, the new regionalism such as RCEP, TPP, and FTAAP will not only bring large economic gains to the participating countries but also generate impetus for a deep global agreement.

More than 70 participants at the full of capacity attended the ERIA's 90 minutes session which focused on the relationship between the East Asian economic integration and the WTO. The session aimed to provide a new perspective on regional and multilateral trading system based on the evolving production networks in the East Asia region. It also aimed to update the WTO officials on the most recent development, benefits and challenges of East Asian economic integration (ASEAN, ASEAN+1, CJK, RCEP and TPP). The session was built upon ERIA' recently published book "The Road to Bali: ERIA Perspectives on the WTO Ministerial and Asian Integration."