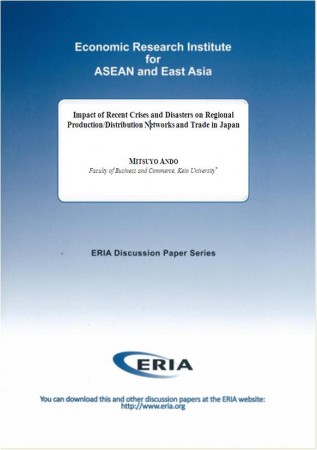 This paper sheds light on domestic/international production networks in machinery industries and examines how the economic crisis and natural/technological disaster that Japan encountered in recent years affected the networks and trade, mainly from the viewpoint of Japan's exports. More specifically, the paper first decomposes changes in machinery exports into extensive and intensive margins and then examines the probability of trade declines and recoveries, using a logit estimation, in order to capture the natures of international production/distribution networks under the crises, i.e., the 2008-2009 Global Financial Crisis (GFC) and the 2011 Great East Japan Earthquake (EJE). Discussion is also presented focusing on domestic activities as well as the impacts of the 2011 Thailand floods. Moreover, considering that the 2011 EJE is not only a natural disaster but also a technological disaster that seriously affected Japan's agriculture and food exports, the impacts on their exports are investigated as well. Our analyses suggest that, regardless of whether demand shock or supply shock, the economic/natural disasters revealed the stability and robustness of production networks in machinery sectors, though their negative impacts are severe and transmitted through production networks at the beginning. At the same time, our analyses draw various policy implications from the experiences of these crises.