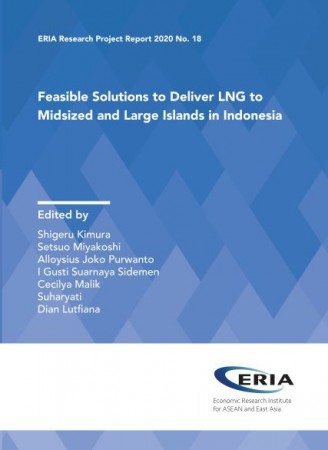 Indonesia’s electricity demand will increase significantly, by about 4.5 times, from 2015 to 2040, according to the 2018 edition of the ERIA–EAS Energy Outlook under the business as usual scenario. This increase will be realised not only by big cities such as Jakarta and Surabaya but also on Indonesia’s small and mid-sized islands. As Indonesia is also rich in coal and natural gas, given the global challenges posed by climate change, natural gas will become an increasingly interesting source of power generation for Indonesia. This study focuses on the eastern part of Indonesia, which is made up of Sulawesi and West Papua, and several groups of very diverse smaller islands. The report proposes a strategy for delivering small-scale LNG carrier vessels from LNG production sites to LNG power generation plants in Eastern Indonesia based on a personal computer-based dynamic simulation model. According to projected LNG demand at LNG power plants, forecast based on electricity demand at each demand site in Eastern Indonesia, the model seeks feasible solutions for delivering LNG from the origin to a destination using a computer simulation approach. The major outcomes of the dynamic simulation model are necessary number of LNG ships, maximum capacity of LNG receiving tanks, and their costs, consisting of capital and operating costs. Several implications regarding LNG polices for Indonesia were presented.