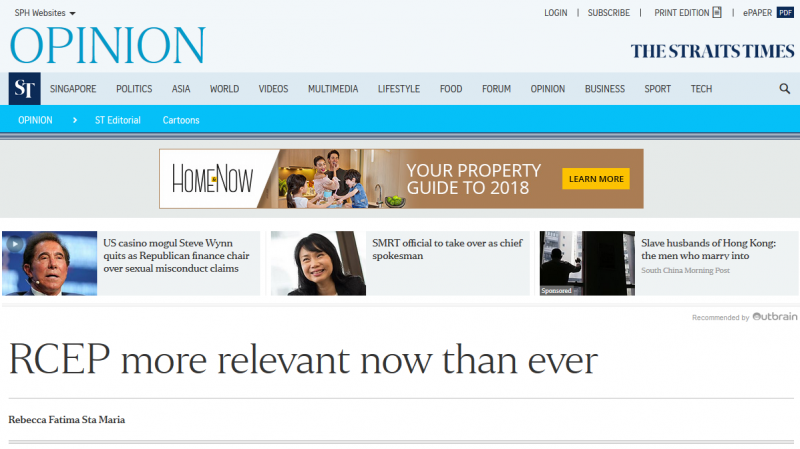 When American President-elect Donald Trump called the Trans-Pacific Partnership (TPP) agreement a "disaster" and vowed to pull out of it as soon as he took office, the international media almost instantaneously pronounced the TPP dead.

And in the next breath, they shifted their focus to the less controversial Regional Comprehensive Economic Partnership (RCEP), calling it "China-led" and pitching it as the alternative to the TPP. The impression was that as one was US-led and the other China-led, they must necessarily be competing agreements. Not so.

Asean member states involved in the negotiations of both the TPP and RCEP were very mindful that these agreements were complementary, albeit at different levels of scope and ambition.

When the FTAAP was mooted by the Apec Business Advisory Council, it was not well received. In fact, at their 2006 Asia-Pacific Economic Cooperation (Apec) Economic Leaders' Summit in Hanoi, the leaders rejected the proposal. It was only four years later that they gave their nod for concrete steps to realise the FTAAP. And it gained momentum during China's chairmanship of Apec in 2014 when it was decided that work on the FTAAP would begin in earnest, with the TPP and RCEP serving as building blocks towards this FTAAP goal.

But even as the study on the framework of the FTAAP is progressing, it appears that an anti-globalisation movement is stirring in the face of Brexit. We have to wait and see if Mr Trump will be able to implement his calls to deal with China and pull out of the North American Free Trade Agreement (Nafta) and the TPP.

The TPP signatories should rightly be concerned about any agreement that excludes the United States, which will limit economic gains. But it is in this environment that Asean and its partners must consolidate and work to deepen economic integration in this region. Focus must be on the opportunities that agreements such as RCEP can bring not just to Asean, but also to the global economy. Thus, it would be in Asean's interest to step up work on the RCEP to ensure its conclusion within the next 12 months.

As this is being done, it would be useful to take on board the valuable outcomes from the TPP.

First of all, there are important lessons for public engagement now that the discourse on trade negotiations is under greater scrutiny. Parties must explain the RCEP to their public so that there is an appreciation of its impact and benefits.

Then, there is the issue of the investor-state dispute settlement (ISDS). Post-Nafta, this has been a major criticism against FTAs because of the apparent "power transfer" from the sovereign state to big business. The high-profile suits brought against governments made the ISDS one of the strong causes against the TPP while it was being negotiated. As a result, the final text of the TPP included processes and procedures to safeguard against frivolous suits by businesses. This is in itself a major outcome that needs to be preserved, and perhaps even further improved upon, in all FTAs and investment agreements.

Another important inclusion in the TPP is the recognition of the contribution of small and medium-sized enterprises (SMEs). This agreement is perhaps the first to have a dedicated chapter on SME development and cooperation, to ensure that they are integrated into the value and supply chains of the bigger companies.

With the uncertainty around the TPP and an apparent rise in protectionism, Asean can lead the way by using the RCEP to keep markets open, deepen economic integration and narrow the development gap among the member states. This is because the RCEP is an inclusive agreement that takes on board, in true Asean spirit, the development concerns of its members. The TPP was an agreement among equals, with no special and differential treatment a la the World Trade Organisation.

Since RCEP is Asean-initiated, Asean must provide the leadership to ensure that negotiations move forward expeditiously. It is important to be reminded of why the RCEP was proposed by Asean in the first place. Above all else, this agreement between Asean and its six FTA partners (China, Japan, South Korea, India, Australia and New Zealand) made good business sense. It would create a market that accounts for over 30 per cent of the global economy.

More importantly, the potential benefits from Asean's demographic dividend and its growing middle class are reason enough to move ahead with RCEP. By consolidating the five Asean+1 FTAs, the noodle-bowl effect of the different rules of origin is reduced, even as the focus is on tariff elimination and streamlining of other trade rules.

The challenge for Asean in the RCEP is the balancing of different ambition levels among the negotiating parties. The more developed members that are also parties to the TPP set this agreement as the benchmark. But at the other end of the spectrum are parties whose levels of development limit what they are willing and able to commit.

Moreover, while Asean has FTAs with each of the six partners, not all of these six partners have FTAs among themselves. For example, RCEP may provide the platform for China, Japan and South Korea to have an indirect FTA just as their trilateral FTA negotiation is stalled.

The RCEP is a reflection of Asean's thoughtful and deliberate process towards economic integration.

Asean must lead the way in manoeuvring and navigating through these difficult waters. In succeeding to do so, the RCEP could well be the model for integrating the least developed countries with developing and developed economies. This model may not be equivalent to the "gold standard" that the TPP is espoused to be, but it will provide a clear pathway towards that goal.