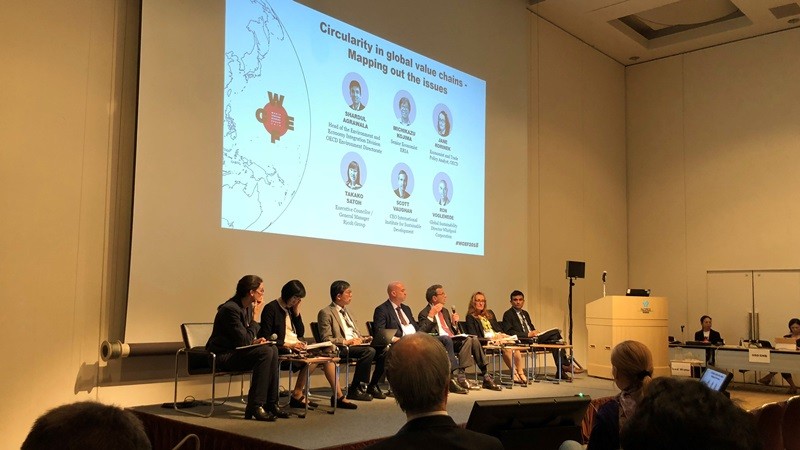 Japan, 22-24 October 2018: The 2nd World Circular Economy Forum was held in Yokohama, Japan. Jointly hosted by the Ministry of the Environment of Japan and Sitra (the Finnish Innovation Fund), the three-day forum brought together around 1,000 people from governments, the private sector and academia.

ERIA partnered in organising the forum and contributed in four sessions. President of ERIA, Prof Hidetoshi Nishimura, gave his keynote speech at the plenary session on the first day, sharing the key findings of ERIA's publication on Industry 4.0. Prof Nishimura discussed the drivers of circular economy transition in the context of Southeast Asia, the region's prerogatives for the circular economy, and the circular economy initiatives which have been applied by ASEAN countries. Furthermore, he outlined possible approaches to accelerate the circular economy in the region and scale impact around existing initiatives. These approaches include strengthening production and innovation capabilities, partnering industry leaders in production and incremental innovation as well as in architectural and modular innovation, and assuming industry leadership.

Prof Nishimura concluded by suggesting that a comprehensive assessment to evaluate countries' readiness to integrate the circular economy and a monitoring framework are needed. He further asserted that while the reduce, reuse, recycle (3Rs) approaches might be an effective entry point for moving towards a circular economy, innovations in technical and financial models are important for the success of the region-wide circular economy transition.

Participating as one of the panellists in the ‘Circularity in Global Value Chains’ session, ERIA Senior Economist Mr Michikazu Kojima discussed the implications of the circular economy for international trade. He pointed out that trade regulations on recyclable waste and secondhand goods that are either too strict and too weak would potentially damage good businesses with environmentally sound technologies. In discussing the applicability of data traceability and digital tools to reduce regulatory barriers and harmonise trade, Mr Kojima referred to the potential use of GPS trackers hidden inside electronic waste to monitor the flow of e-waste from collection points to its final destination and at the same time, evaluate the performance of recycling programmes.

ERIA’s Senior Energy Economist Dr Venkatachalam Anbumozhi participated in the session titled ‘Circular Economy and Rural Development’ wherein he spoke about the circular advantage of eco-industrial clusters in the urban-rural fringe areas of Asia. Comparing four Asian countries where the circular economy initiative has been implemented, he brought into the discussion the role of technology, social capital and integrated policies as the common factors in meeting the goals of the circular economy.