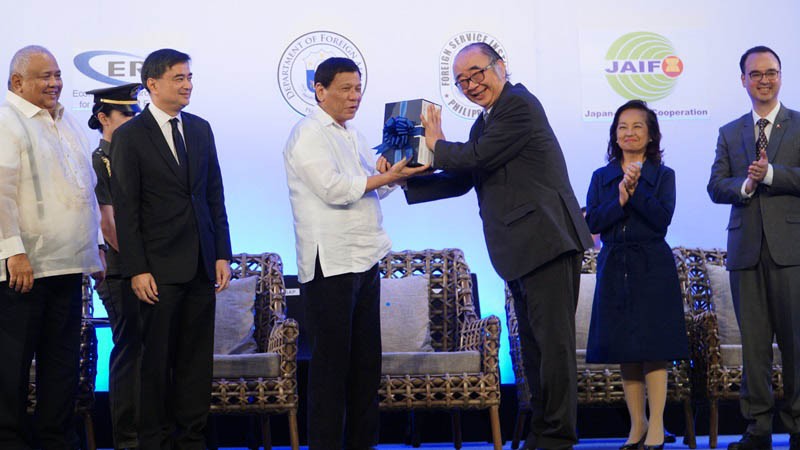 The Economic Research for ASEAN and East Asia (ERIA) gathered a powerhouse cast of eminent leaders and top diplomats in the Conrad Hotel, Pasay City, Manila for a discussion on how to ASEAN could adapt to the demands of the next 50 years.

The High Level Forum on ASEAN @50--which was co-organised by ERIA, the Philippine Department of Foreign Affairs (DFA), the Foreign Service Institute (FSI), and supported by the ASEAN Foundation (AF) and Japan ASEAN Integration Fund (JAIF)--is the culmination of a series of public symposia held in major Philippine cities throughout the year. It is part of ERIA's contribution to the commemorative events celebrating the 50th founding anniversary of the Association of Southeast Asian Nations (ASEAN). Over three hundred diplomats, members of the academe, and civil society attended this final forum in Manila.

The string of symposia focused on issues related to the three ASEAN communities - the ASEAN Political-Security Community, the ASEAN Economic Community, and the ASEAN Socio-Cultural Community.

President Duterte, in his keynote speech, called on current ASEAN leaders to strengthen the organisation by enabling ASEAN citizens to understand the its significance on their own personal and daily life and how ASEAN's success 'will make their lives better.'

'ASEAN at 50 is not a complete story, nor [is it] a finished product. It is a steadily evolving pursuit towards the realisation of our vision of a peaceful, stable and resilient community with the capability to respond effectively to the challenges within and outside our borders,' President Duterte said.

Dr Macapagal-Arroyo and Mr Vejjajiva gave similar recommendations that, if ASEAN were to remain relevant, it needs to get the ASEAN people more invested in ASEAN notwithstanding the different realities in each of the 10 ASEAN member states.

The morning discussion centred on the topic ASEAN: Partnering for Change, Engaging the World.

Among the panellists was former ASEAN Secretary General Dr Surin Pitsuwan who underscored the need to move forward with a sense of communal responsibility that had not been necessary in the previous years since ASEAN had its member-governments in the driver's seat.

The challenge on how ASEAN could remain relevant in the modern world was likewise discussed by top diplomats such as former Philippine Foreign Secretary Amb Delia Domingo-Albert, former Minister of Trade and former Minister of Tourism and Creative Economy of Indonesia Prof Dr Mari Elka Pangestu, as well as former First Deputy Minister for Foreign Affairs of Vietnam Amb Le Cong Phung.

Amb Elizabeth Buensuceso, the Philippines' Permanent Representative to ASEAN, lauded the critique made by the panellists. She said it was evident that here is a group that 'deeply cares' for ASEAN.

The High Level Forum on ASEAN @50 is one of the two major projects that ERIA undertook to commemorate ASEAN's 50th anniversary.

The other is the five-volume publication ASEAN @50: Retrospectives and Perspectives on the Making, Substance, Significance, and Future of ASEAN. The volumes were gradually launched in the series of symposia held in Iloilo, Davao, and Manila earlier this year.

The book series describe the story of ASEAN, building up from managing intraregional disputes to facilitating the management of pan regional dispute; from economic cooperation to economic integration; and from nation-building to community-building.

Volume 5 of the series might prove to be the most significant as it tackles the issues around 'the ASEAN Economic Community Into 2025 and Beyond.'

'We hope (the books) can provide an excellent reference materials and help present and future readers and the student to better understanding of ASEAN,' said Prof Nishimura in his speech introducing the books at the forum.