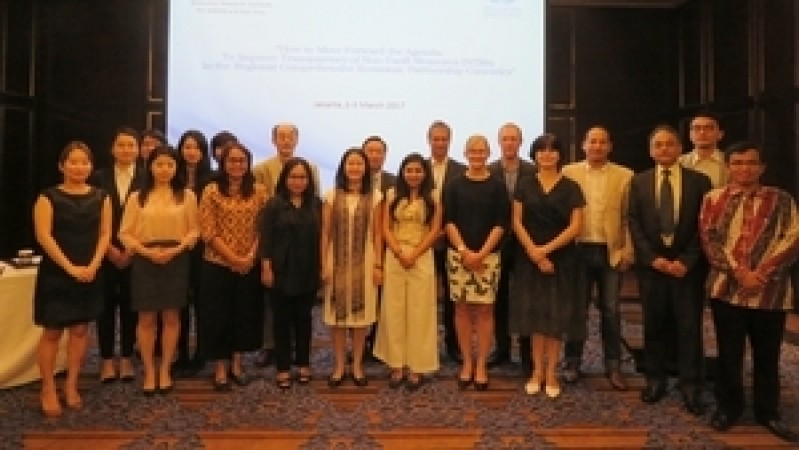 On 2 March 2017, the Economic Research Institute for ASEAN and East Asia (ERIA) and the United Nations Conference on Trade and Development (UNCTAD) held a lunch meeting in Jakarta to discuss the progress of the development of the Non-Tariff Measures (NTMs) Database for RCEP countries (Australia, China, India, Japan, Republic of Korea and New Zealand).

Prof Hidetoshi Nishimura, the President of ERIA, expressed his deep appreciation of the work by the national teams for NTM data collection for six RCEP countries. The initiative follows on the successful NTM data collection for ASEAN countries, which promotes better understanding and transparency of existing NTMs among government officials, academics, NGOs and business society. The ASEAN NTM database is available to the public at http://asean.i-tip.org for public, and the East Asian countries database will be published by mid-2017.

The work on NTMs is important because although multilateral trade negotiations have helped to substantially reduce tariff rates, NTMs have increased significantly year by year. The ERIA - UNCTAD NTM data collection for East Asia countries is the first step in the improvement of NTMs' transparency before further institutionalisation in countries. The work will be beneficial to support the reviewing of NTMs through the Regional Comprehensive Economic Partnership (RCEP) negotiations or High Level Task Force on ASEAN Economic Integration (HLTF-EI) and East Asia Summit Senior Economic Officials Meeting (EAS SEOM). The Ambassadors and government representatives welcomed the initiatives and endeavours to bring the awareness of NTM issues to national policy-makers.